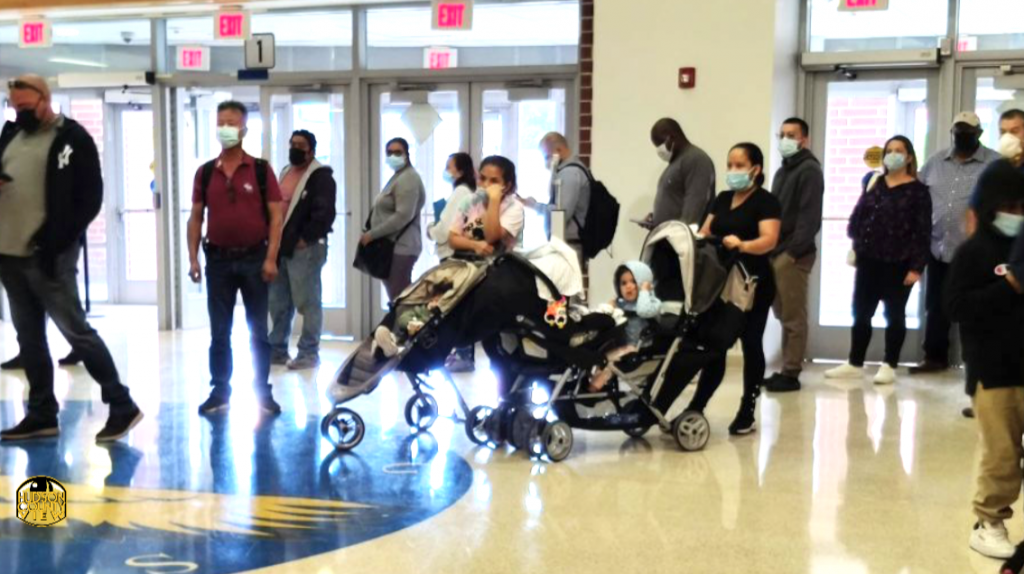 About 75 people came to the high school looking for help, with several noting extensive damage to their basements, including the destruction of furnaces, water heaters, and stored goods.

“There was far more water than we anticipated. It was unbelievable. The night of Ida, Palisade Ave and our street were rivers,” said Union City resident Anja Bosch, an owner of a two-family home on the corner of Palisades Avenue and 20th Street.

They did not have flood insurance and had never saw a need for living on a cliff on the Palisades until now.

“The day of the hurricane here, the sewage pipe broke. Within 30 minutes, the basement was filled with three feet of water. We lost our water boiler. We lost both furnaces. We lost the washer/dryer and personal items as well,” she continued.

Bosch also said the walls were seeping with water and the floor cracked open. Her neighbors didn’t fare any better, noting that her next door neighbor had at least four feet of water in his home – ruining the entire basement.

Bosch added that to make matters worse, since so many people had ruined water heaters, none were available in nearby stores. She indicated that they still don’t have one.

“We absolutely need help after a year of COVID and being unemployed,” she further stated, noting she preferred to speak with someone in person rather than over the phone or online.

People who applied online need to wait for an email to arrange an appointment for an inspector to view their property, a process that usually takes seven and 10 days.

Those who start the repair process first must then go through the Small Business Administration (SBA) to secure a loan to appeal and be sent back to FEMA, which will reimburse the costs of repair that has already been started.

After that, they have 60 days to appeal after receiving a letter from SBA.

For issues other than helping with housing, a FEMA representative said they mostly refer people to the Red Cross, the United Way, the Salvation Army, and New Jersey 211.

“I had the main backed up into my basement, and it was like a river. I have a tenant who lives downstairs in the basement apartment,” a Union City resident woman who declined to give her name said.

“So my two water heaters, my two furnaces, the refrigerator. The furniture I had downstairs was destroyed. I lost my tenant.”

This was one of several opportunities for Hudson County residents to meet with FEMA representative in person last week.