Two years after North Bergen kindergartner Nevaeh Hernandez lost a three-day battle with the H1N1 strain of the flu, her family and neighbors across North Hudson have resolved to spread awareness of just how dangerous the virus can be. 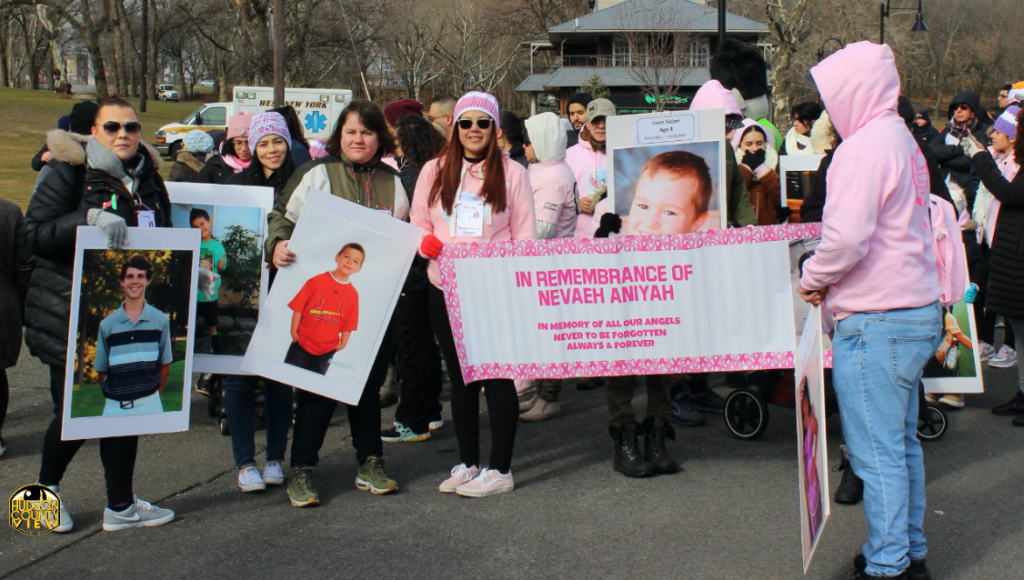 Today, dozens attended the second annual memorial walk at James J. Braddock Park in her memory, to support the cause of improving flu vaccine rates among children.

The crowd was led by a color guard made up EMS workers from Bayonne’s McCabe Ambulance, where Nevaeh’s mother, Stephanie Conteron, works.

Additionally, there was a heavy presence of EMS and other first responders from North Bergen, West New York, Union City, and the Hudson County Sheriff’s Office, along with several volunteers donning mascot outfits from children’s movies.

Conteron, and her grandmother, Sandra Rivera, spoke about what the annual awareness event means to them.

“When we started this last year, we weren’t really aware that there were remembrance walks like this,” Conteron said.

“I did some google searches to see if there were any in our area, which was how we got familiar with the End-FLUenza Project, the nonprofit organization we’re working with.”

The End-FLUenza project, which encourages parents across the country who’ve lost children due to the flu to host remembrance walks, hosts public awareness campaigns to increase vaccination rates and preventative measures among children, who are most susceptible to serious flu complications.

“We work in EMS, so our EMS family has been able to come out and spread the word,” Conteron continued.

“This is a better turnout than I expected, hopefully every year gets bigger and bigger. Even as an EMS worker, I didn’t know it could be this bad. Adults are passing away from flu complications as well. Even if it’s just one or two people, I hope we can get a message across.”

“We hope that, in the name of my granddaughter, we might be able to change something. Maybe it will be the way things are run in ER visits, or maybe we can stop the fear that parents have of giving their kids a flu shot,” she said.

“They’re under the impression that their kids might get sick, which is obviously possible because the flu has many strains. But you’re building up antibodies to fight the virus each time. It will prevent deaths. What we do know is that Nevaeh will never be forgotten.”

Rivera said that she hopes their involvement can eventually fund school assemblies throughout Hudson County.

“We have Mr. Sniffles [the End-Fluenza mascot] here today, and we’re building up to have him make visits to schools to teach kids the little things, like handwashing and coughing into your elbow,” Rivera said.

After Nevaeh Hernandez was brought to Hoboken University Medical Center on Feb. 9, 2018 with a headache and a fever, her relatives said she was sent home within a few hours after being seen by a nurse practitioner, with negative flu and strep test results and no diagnosis.

She never saw a doctor at Hoboken University Medical Center, her parents said.

Her symptoms worsened overnight, and Neveah’s mother took Neveah to a different hospital, Hackensack University Medical Center, the next morning.

Within an hour of arriving at Hackensack UMC, she received the H1N1 diagnosis. Her fever peaked at 106 degrees, and she suffered four seizures, family members explained.

Grief-stricken, her family held a press conference just days after Neveah’s passing, accompanied by attorney Louis Zayas, to alert parents about how quickly the flu can become life-threatening in young people, who are among the most susceptible to it.

As was widely reported, Nevaeh’s parents, Conteron and Gabriel Hernandez Jr., filed a suit against Hoboken University Medical Center and several of its doctors yesterday in Essex County Superior Court.

The suit, filed by attorney Francisco Rodriguez, alleges that the defendants were “negligent, careless, reckless, and unskillful in failing to properly diagnose and care for Neveah Hernandez’s influenza.”

Citing Kayur Patel, the family’s expert witness who wrote that the care rendered to Neveah Hernandez deviated from standard procedure, Rodriguez went on to allege that doctors at Hoboken University Medical Center failed to check Neveah’s vital signs prior to discharging her, according to media reports.

It was also widely reported that the family accuses Neveah’s pediatricians, Rodrigo and Elma Castillo, of failing to provide her with the 2017-2018 flu shot during her routine vaccines.