Sudhan Thomas, the former Jersey City Board of Education president now ensnared in two separate corruption cases, pleaded not guilty to embezzling over $45,000 from the local employment and training program when he led the non-profit agency last year. 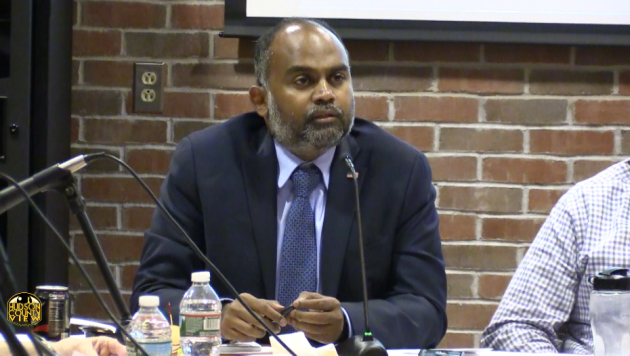 Thomas, 44, appeared before U.S. District Judge Leda Dunn Wettre for his arraignment in Newark on Thursday and was escorted into the courtroom in handcuffs.

The government has charged Thomas with theft from an organization receiving federal funds.

In the complaint, which was released on Friday, officials alleged Thomas embezzled over $45,000 from the local employment and training program, which receives funding from the U.S. Department of Housing and Urban Development, during his tenure as acting executive director, as HCV first reported.

Thomas served as acting executive director for roughly six months, between January and June of 2019, where he did not receive a salary or other compensation.

According to authorities, Thomas issued checks made out to cash that he then either cashed himself or used to obtain bank checks that he made payable to a business entity – Next Glocal – that he controlled.

He then used those funds for to pay for personal expenses including rent and airfare and hotel expenses for a trip to Hawaii, the criminal complaint says.

If convicted, he faces a maximum penalty of ten years imprisonment and a $250,000 fine.

Chris Adams, his attorney in the matter, declined to comment on the charges or Thomas’ plea.

Thomas currently finds himself in dire legal trouble. The federal charges were unveiled just over two weeks after the New Jersey Attorney General’s Office charged Thomas with taking cash bribes in his role as the BOE president.

In that case, authorities alleged that Thomas accepted more than $35,000 in cash bribes by an informant working for the government in order to arrange for the cooperating witness to be hired as a special counsel for the Jersey City BOE.

He has already vowed to fight those charges.

Meanwhile, Thomas is also a defendant in a whistleblower lawsuit filed by a former JCETP accountant back in August.

Prior to filing her complaint, the whistleblower, Nuria Sierra, sent a letter to the offices of the U.S. Attorney and New Jersey Attorney General asking them to investigate Thomas for writing three checks to cash totaling $16,500.

Judge Wettre ordered Thomas be released on a $75,000 bail bond under several conditions, which included that he restrict his travel to within state lines, surrender all passports and travel documents, undergo mental health testing, and maintain or actively seek employment – among other things.

No trial date was set at the hearing.