A digital “Dirty Davis” billboard attacking Bayonne Mayor Jimmy Davis has sprung up in Atlantic City during the week of the annual League of the Municipalities conference, paid for by a Washington D.C.-based super PAC. 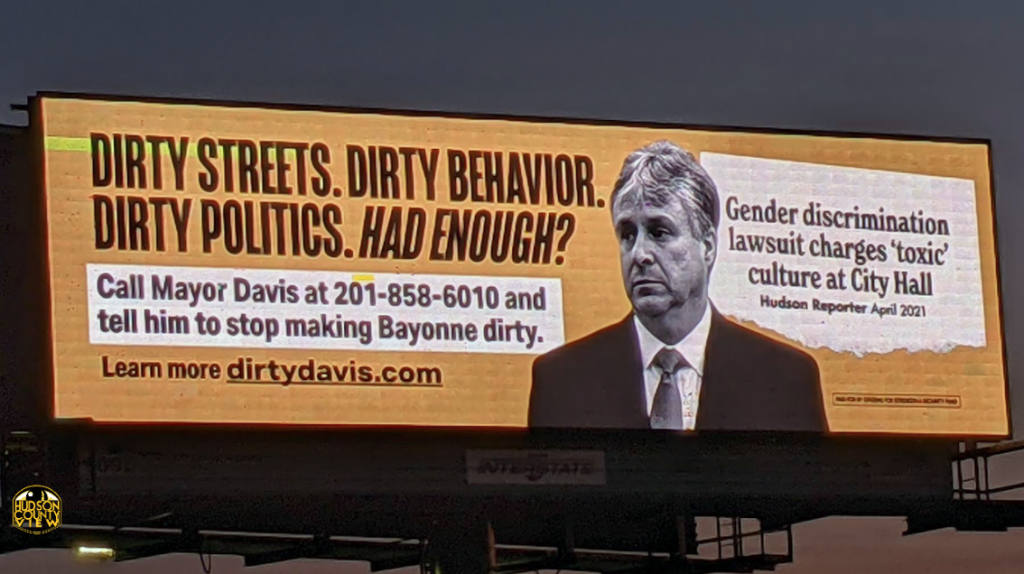 The billboard, paid for by the Citizens for Strength & Security Fund, reads “Dirty Streets. Dirty Behavior Dirty Politics. Had Enough? Call Mayor Davis at 201-858-6010 and tell him to stop making Bayonne dirty.”

Last month, the PAC, which was formed in DC back in 2011, launched dirtydavis.com with an accompanying web ad, where Davis is criticized for the city sanitation contract being granted to a donor (though the city said the donation was later rescinded), as well as for lawsuits alleging gender discrimination and sexting a subordinate, as HCV first reported.

The gender discrimination suit, filed by Business Administrator Melissa Mathews, is referenced in the billboard as well.

The political advertisement is situated right after the toll booth at the Atlantic City Expressway as politicos throughout the state convene at the casinos to network, talk shop, and maybe even attend a panel or two – all over drinks of course – until Thursday.

Federal Election Commission (FEC) reports from this year do not show any recent donations to the PAC.

Davis is currently running unopposed ahead of seeking a third term in May, though he is widely expected to face a challenge from Council President Sharon Nadrowski at this time.

Phil Swibinski, a spokesman for Davis, denounced the flier and wrote it off as being pointless and ineffective.

“Whoever is behind this dark money, out-of-towner led plot to take over Bayonne clearly doesn’t know what they’re doing, because spending this kind of money on a billboard in Atlantic City to impress lobbyists and politicians will have as much impact on this election as their last failed stunt at the Bayonne High School homecoming game that backfired badly and enraged parents,” he said.

“Real Bayonne residents know that the city is moving forward thanks to Mayor Davis because they can see the progress right in their own neighborhoods without being told what to think by a big money Super PAC.”

Editor’s note: This story was updated with a comment from Mayor Jimmy Davis spokesman Phil Swibinski.