As West New York quickly approaches the peak of their municipal election season, last night’s board of education meeting was a nasty one as a clearly divided board tried to address electioneering allegations in their own separate ways.

“Many custodians have been complaining about Hector Yanez, Ricky Solares, and other personnel, [about] being harassed, pressuring the staff members, by mail, to vote for Column A … to work for the New Beginning elections or whatever,” resident John Rodas said during the public portion of the meeting, who read off a piece of paper.

In light of the claims of school district employees being strong armed to work for the New Beginnings West New York team, an accusation first made by Mayor Felix Roque last week, Rodas asked what Superintendent of Schools Clara Brito Herrera would be doing to look into the matter.

Roque has implored New Jersey Attorney General Gurbir Grewal to investigate, though both Gabriel Rodriguez, the head of the NBWNY slate and also a BOE employee, along with Herrera, have brushed off the allegations as election season silliness at best.

While a handful of other speakers asked questions similar to what Rodas did, with a couple also requesting details about the employment of Rodriguez and one of his running mates, Yoleisy Yanez, Board President Adam Parkinson appeared to squash the conversation with an add-on resolution.

” … Whereas the West New York Board of Education respects the rights of employees to engage, or not engage, in accordance to with applicable laws, rules regulations and policies.”

Parkinson further stated, via resolution, that school premises were prohibited from engaging in political activities, with the exception of predetermined polling locations.

The measure, seconded by Trustee Jonathan Castaneda, also the campaign manager for NBWNY, passed by a vote of 6-2(1), with Trustees Maite Fernandez and Ron Scheurle – also an independent commissioner candidate – voting no.

In what sounded like a parting shot in the moment, Parkinson denounced everyone who brought election season politics into the meeting since it was the annual Teachers of the Year award ceremony.

“All of our employees do such a fantastic job: weâ€™re a high performing school district, weâ€™re a future ready district. Weâ€™ve honored so many of our teachers, of our educators,” he began.

“And at the teacher of the year meeting, this is what we have to worry about. Itâ€™s sad â€¦ This is the nonsense we have to deal with because thereâ€™s an election in West New York.”

However, that turned out only to be the first half or so of the increasingly tense public session.

After an hour or so closed session, Fernandez, as she committed to last week, introduced a resolution asking for Herrera to halt political involvement at the board and to advocate for a probe by the attorney general.

“Now therefore be it resolved by the Board of Education of West New York that the Superintendent of Schools issue a directive that no school employee shall be requested by any other school employee to participate or work for a political candidate,” Board Counsel Lester Taylor read into the record.

” … Any employee that refused to work for a political candidate or who discloses and reveals political pressure shall be deemed a â€œwhistle blowerâ€ and shall be provided protection against any form of retaliation and … the Board of Education does herein join with Mayor Roqueâ€™s request that the Attorney General investigate these complaints.”

While Fernandez, who is running with Roque, received a second from Gonzalez, who works in the mayor’s office, Taylor was quick to say that such a resolution was legally deficient, and even if it wasn’t, it would not be applicable due to the measure that passed about an hour beforehand.

“A board members role is to set policy and to see that the school district is well run, but no to micromanage or run the day-to-day affairs of the school district. Respectfully, this seems to be a bit duplicative because apparently there was a resolution earlier that set forth board policy.”

Trustee Ruben Mendoza argued that he felt the local legislation was clear in explaining that it did not take away any board employee’s rights to participate in the political process, just simply not to do so while on the clock – as well as to prohibit recruitment.

Still, Taylor said that the language in the resolution did not make that clear and it was not open to interpretation.

“What you said is a speculative hypothetic that is not really captured by what this says. Again, I can only interpret what it says, not [interpret] what it means, however it was crafted.”

While it looked to futile to pass the resolution, Gonzalez also forged ahead with questioning.

“So what if they’re afraid of them being fired because they’re not following through to what is asked of them?,” she asked.

Taylor responded that employment law protects all workers from harassment, retaliation or any other form of illegal and/or unethical conduct, especially after it is reported up the chain of command.

Furthermore, Herrera expressed that more than enough time had been spent on this topic, especially given that the person who introduced it is running for office.

” … This is a double-edged sword here, because I’m being told, in a resolution, by a candidate, that I can’t speak after hours and exercise my professional right like every other professional in this room? That’s intimidation and harassment?”

Eventually, things came to a halt when Castaneda made a motion to table the resolution and remand it to the policy committee.

” … Just based on what our attorney said, itâ€™s obvious this was written by a make believe attorney, perhaps a disbarred attorney, the point is we would look at this over the course of the next month to see if itâ€™s legal.”

Parkinson seconded the motion and the superseding motion to table passed 5-4, with Mendoza, Scheurle, Gonzalez and Fernandez voting no.

With Hudson set to exit ICE contract, NYIFUP calls for release, not transfer, of detainees 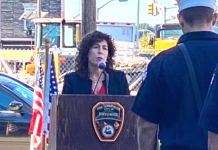