Despite a public outcry, the Hoboken City Council narrowly approved an ordinance that will raise the local union donation limit to $7,200, the amount state guidelines allow, rescinding the prior $500 maximum contribution locally. 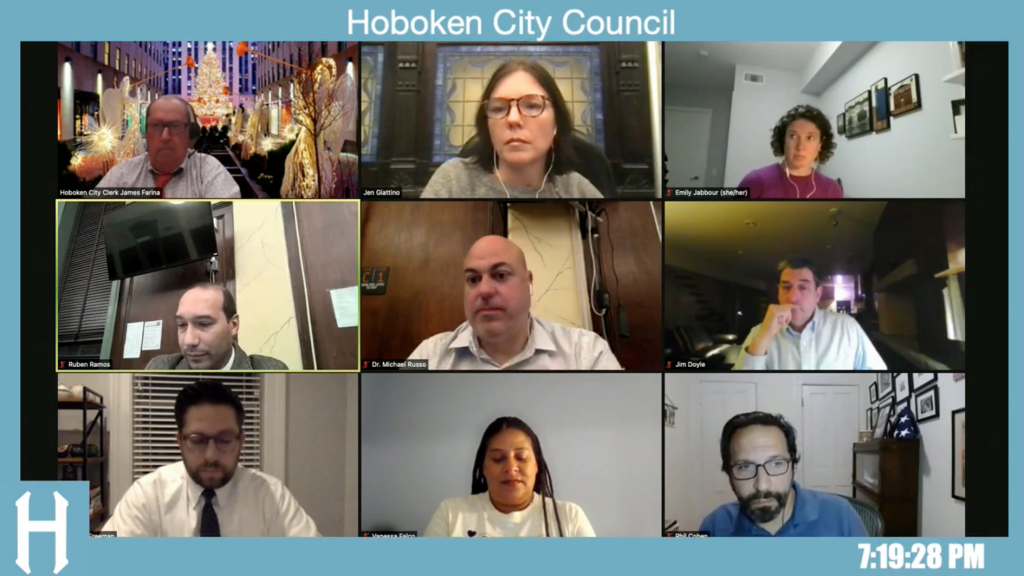 “I have read the propaganda that’s come out and there was somebody who spoke last council meeting [who said] that there’s an enforcement issue: you don’t fix it by making it lax. If we have this law on the books and there’s a candidate that’s ignoring it because it’s unenforceable it becomes a campaign issue. Certainly I wouldn’t want to see that in a candidate I was voting for,” said resident Cheryl Fallick.

He accepted roughly $90,000 over the city’s limits, going by the state guideline of $7,200 for union contributions, as opposed to the $500 limit in the Mile Square City.

While there is a court filing related to this matter, it’s been in court for roughly 26 months and doesn’t appear to be making much headway.

Nevertheless, the ordinance has a trigger clause, meaning that it won’t go into effect until the case is resolved and the limit will remain at $500 if Defusco faces sanctions.

Conversely, Stronger Foundations, the super PAC Fallick alluded to, spent $70,000 on then-Councilman-at-Large Ravi Bhalla’s mayoral bid in 2017, which is legal though some argue is still against the spirit of the law on the books.

Those who spoke during the public portion were unanimously against the measure, continuously citing that this ordinance would roll back the stringent pay-to-play reforms introduced under Mayor Dawn Zimmer about a decade ago.

“I’m urging all of you to vote in opposition to this ordinance. 15 years ago, local citizens organized to institute election reform in Hoboken. I’m sure all of you are aware of the corrupting influence campaign money can have in local government decision making,” noted Fund for a Better Waterfront Executive Director Ron Hine.

“In the 2004 Hoboken elections, the incumbent mayor raised $1.4 million, outspending his opponent by a 10-to-1 margin. Professional firms with city contracts gave the maximum allowed, as did developers with projects pending before the city. People for Open Government was successful in passing several measures that put into this practice of pay-to-play.”

Dawn Rathel added that she didn’t see the logic in the local legislation, which would allow every candidate to participate in this “undesirable activity equally.”

“I don’t see how that’s a solution. The logic to me sounds like ‘well somebody got away with stealing so let’s just make that legal.’ I also understand that there’s an attorney who says it’s unenforceable, but I find that hard to believe that there’s nothing that can be done,” she stated.

“We all know the history: there’s no sense in going back to it,” asserted resident Carmine Sodora, who said the $500 limit is needed to keep local elections clean and fair.

Another public speaker, Michael Evers, said the measure welcomes a quid pro quo and that a judge is yet to rule if legislation is actually enforceable or not, despite what prior legal opinions have said.

He also asserted that Councilwoman-at-Large Vanessa Falco is conflicted from voting since she is becoming the city’s new director of housing next year after her term expires.

“You have a conflict of interest: if in fact the mayor of this city is in favor of this ordinance and you’re about to become an employee: you should recuse yourself from this vote, okay?,” Evers stated.

“And frankly, not to recuse yourself opens the door to litigation, okay, because there are plenty of people in town who can hire lawyers, I’ve been one on occasion to do it myself, to challenge things that we think are wrong.”

During debate from the council prior to the vote, 2nd Ward Councilwoman Tiffanie Fisher said the governing body was not representing their constituents by supporting this local legislation.

“How do you feel that this reflects the will of the people? Have you heard one person, one person, come and say that they are okay with undoing our pay-to-play? One person? This vote tonight is a special interest vote only. That’s it. And it’s absolutely not representative of the people,” she exclaimed.

Fisher also vowed to personally lead an effort to get a referendum on the ballot if the measure passed.

Councilman-at-Large Jim Doyle said he was “equally disgusted” with Fisher, calling it a “frustrating and complicated” issue. He argued that it’s not pay-to-play, since it doesn’t involve donors getting city contracts, and is therefore campaign finance reform.

“There’s either an intentional misrepresentation or there’s either just ignorance. I don’t know which it is … I don’t always agree with Councilwoman Fisher, I rarely accuse her of being ignorant … What this is about is about a level playing field. There’s been some non-compliance and there is a suit and we are waiting for an answer.”

He also added that he didn’t agree that non-compliance for one shouldn’t mean non-compliance for all, though if the ordinance is indeed unenforceable this is the only corrective action possible – using state law instead of municipal law.

6th Ward Councilwoman Jen Giattino expressed dismay over even debating this ordinance, stating that it made no sense to take action before a judge has ruled – unless bigger donations are the actual desired outcome.

“I’m blown away. I think about when I started on this council and this amendment was one of the first things I’ve voted on and what a big deal it and was an what we’ve come to today where that’s being thrown out and it just doesn’t matter and we’re comfortable taking large amounts of money from outsiders – yes Councilman Cohen, outsiders, it’s crazy to me.”

Council President Ruben Ramos noted that he’s always adhered to the current rules and said it didn’t make sense to do so until the criminal complaint against DeFusco is resolved.

Fisher, who filed a municipal complaint against DeFusco for violating the ordinance in 2017, claiming that Corporation Counsel Brian Aloia said it was unenforceable and it was up to her to determine whether the entities were PACs or not.

Aloia said he didn’t recall the conversation going that way, but Fisher continued that her complaint was never withdrawn and just fell to the wayside. She also called the more recent complaint politically motivated.

Cohen doubled down that this was about being advocates for union workers seeking better conditions.

“They’re interested in one thing and that is better working conditions for the men and women in the State of New Jersey. When people talk about pay-to-play and unions, and as Councilwoman Giattino refers to them – outsiders – these are people in our community and they have a voice in our community.”

“Our goal is simply to lift up those individuals who make up the very best of the Hoboken community, who need a helping hand. Nothing more, nothing less,” SEIU 32BJ NJ State Director and Executive Vice President Kevin Brown wrote in a letter to the council yesterday.

“That’s why it was troubling to hear certain Councilmembers insinuate unions like ours are
engaging in ‘unethical’ or ‘corrupt’ behavior … suggesting that we are engaging in ‘pay-to-play’ horse-trading with certain elected officials. Let me be clear – nothing can be further from the truth.”

However, after a motion to reconsider, Falco switched her vote to yes, allowing the measure to pass 5-3. She didn’t explain why she changed her mind.

Fisher, Giattino, and Ramos voted no.