Once inside, it was clear that the construction taking place created deplorable conditions for election workers and voters. Besides the visible issues and unpleasant odors, workers told Hudson County View that sewage water was flooding into the room during the early morning.

Michael Harper, a representative for the Hudson County Board of Elections, said the county wasnâ€™t aware of the conditions until 6:15 that morning, and because five districts voted in the building they didnâ€™t want to confuse or create undue hardships on voters by moving the location. In addition, he said the board would never knowingly hold an election in those conditions and tried their best to accommodate workers.

According to Harper, Salem-Lafayette leases the room for the day at a rate of approximately $100 per district.

Harper said he didnâ€™t think the board would change the location in the future, adding that they hadnâ€™t had a problem like this before at the location.

Additionally, Harper noted the difficulty in finding workable polling locations to accommodate voters in the area.

The building’s management company had no comment on the polling conditions. 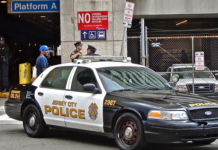