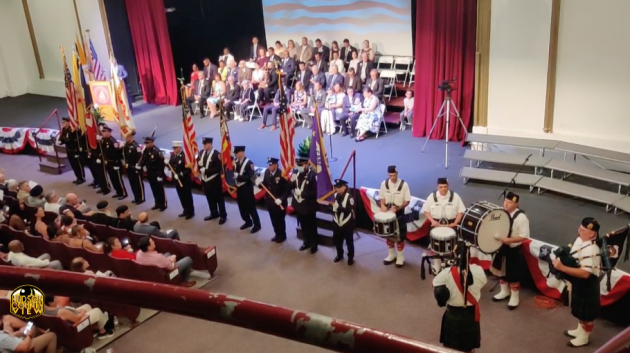 The event was held in the auditorium of Bayonne High School, with family and friends on hands for the elaborate two-and-a-half hour event.

Team Davis swept for the third time in a row, with the mayor avoiding a runoff race with then-Council President Sharon Ashe-Nadrowski by just over 100 votes. Davis was sworn in by former City Clerk Robert Sloan.

Davis noted a lot has changed in the city during his tenure and there is a lot more to come.

Davis noted that the number of parochial schools in the city has diminished, the east side has become a residential neighborhood, and the waterfront has seem major development in one generation.

“As much as things are different in Bayonne than when I was a kid, things are much different now than they were just eight years ago. There is no structural deficit anymore in the City of Bayonne,” he said to applause.

“According to our last census, 10,000 new residents have moved into our city. Military Ocean Terminal (MOT), our base, is almost fully developed.”

Davis noted many former industrial sites have become residential developments “that take advantage of light rail access, waterfront views, or both,” continuing that when he took office in 2014, many of these properties had fallen into disrepair.

“It was an industrial center for a long time. It was a military site for close to a century. Change may be uncomfortable, it may be upsetting, it may be unsettling but change is necessary. Change is another name for growth,” he said.

“Even the Bayonne Bridge has changed. Other than Chuck Wepner, is there anything more Bayonne than the Bayonne Bridge? It was my jungle gym. We were not that bright. The bridge I grew up with looks nothing like it used to and that’s ok. Everything in government, with the exception of mask mandates, takes longer than you think it will.”

He also pointed out that a movie studio, ferry service, and UPS distribution center are on their way.

La Pelusa, the longest-tenured councilman in the Peninsula City, took over the governing body’s top role by a unanimous vote (5-0).

“I can’t emphasize enough the value of creating local jobs and thousands more are coming very soon. I’m proud of being an integral part of rebuilding Bayonne,” he said.

La Pelusa noted the need to stabilize taxes, increase public safety, educate the youth, and improve the overall quality of life in Bayonne during the next four years.

One specific accomplishment he pointed to was working with U.S. Rep. Albio Sires (D-8) to  secure a $5 million grant to refurbish Russell Golding Park which will be complete soon.

La Pelusa noted he lost his wife to COVID-19 early on in the pandemic and when he was campaigning, “she was right over me watching.”

“We should never waste a moment of time and always help our fellow man,” he added.

Joining him for the first time are 2nd Ward Councilwoman Jacqueline Weimmer, who won an open seat with Sal Gullace not seeking re-election, and Councilman-at-Large Loyad Booker – who replaces Ashe-Nadrowski.

Additionally, Assemblyman Will Sampson (D-31) commended Davis for selecting Booker to run on his ticket and become the first Black council member.

“When you look out at Bayonne, you see that rainbow,” he said.

In light of Melissa Mathews not being reappointed and resigning instead of taking her old job, the council appointed Russo to take over in an interim capacity during their reorganization meeting. No other director changes were made on Friday.