Former Bayonne Assemblyman Jason O’Donnell made his first court appearance today after being hit with accusations that he took cash bribes during his unsuccessful 2018 mayoral campaign. 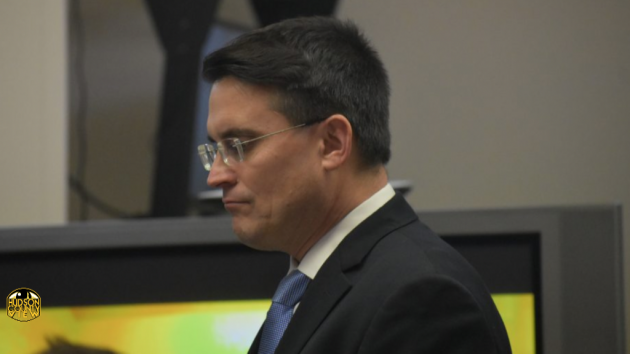 O’Donnell, 47, appeared in Hudson County’s Central Judicial Processing court with his attorney, Leo Hurley, Jr., where they were given a February 14th court date.

The former Democratic Assemblyman was charged in December with accepting a $10,000 cash bribe for his Bayonne mayoral campaign in 2018.

O’Donnell and his attorney both declined to comment today, but Hurley previously told Hudson County View that O’Donnell “intends to contest these allegations with equal vigor and to enter a plea of not guilty to the charges against him.”

â€œJason Oâ€™Donnell has dedicated his life to serving his community, has always conducted himself in a manner that makes his family and friends proud, and has consistently and vigorously fought for their best interests,” he said at the time.

The state Attorney General’s Office accused O’Donnell of accepting a paper bag filled with $10,000 from a cooperating witness for his mayoral campaign in return for tax work with the City of Bayonne if elected.

“I just wanna be your tax guy,” the witness allegedly said.

He then failed to file campaign reports with the state’s election law enforcement commission, authorities said.

The Bayonne resident was one of five officials in New Jersey busted in the sting.

Former Jersey City Board of Education President Sudhan Thomas was also caught up in the bust, being accused of taking $35,000 in cash bribes in hopes of getting a 2021 city council bid off the ground.

O’Donnell, who is married with three children, has served in a number of public roles in Bayonne throughout the course of his career.

He was the assemblyman for the 31st District from 2010 through 2016 and also served as the city’s public safety director after retiring as a captain of the fire department.

Demolition of historic Bayonne building halted until after committee meeting