New Jersey is the last state in the country to remain out of compliance with federal Clean Water Act standards, and all 12 Hudson County municipalities are among the many that could spend billions over the next two decades or so. 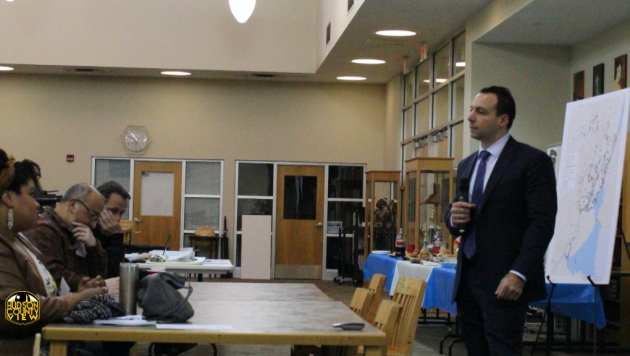 The clock is winding down for sewer authorities to submit proposals to the New Jersey Department of Environmental Protection for extremely lengthy, expensive, and disruptive infrastructure overhauls of combined sewer systems, which service all everywhere in Hudson, officials said at a meeting at Harrison High School on Thursday.

Combined sewers channel both raw sewage and stormwater through the same tunnel unseparated.

These systems, many of which were constructed over a century ago, don’t have the capacity to contain their contents during wet weather events.

While the issue is a regional one, municipalities are tasked with coming up with remediation plans at a local level.

After the Clean Water Act was passed, municipalities who were not in compliance with capturing at least 85 percent of CSO wastewater were given a five-year EPA permit to devise a series of alternatives to the most expensive fix of all, which is gutting and completely replacing each respective sewer system and installing new channels that keep storm water and sewage separated.

The budgets for each town ranges in hundreds of millions of dollars, and Clean Water Act infrastructure improvements are expected to be the single greatest capital expenditure each municipality has historically made.

In larger communities, such as Jersey City and Newark, municipal governments and sewer authorities may tentatively have to spend over one billion dollars on sewer improvements, according to plans submitted to the NJDEP thus far.

For the past five years, sewerage authorities, public officials, and community groups have been meeting as a commission under the banner “Clean Waterways, Healthy Neighborhoods” to pull each town through the DEP’s approvals process.

The Passaic Valley Sewerage Commission, a state agency which oversees water quality and sewage treatment near the Passaic River and Newark Bay, has been at the forefront of the organizational efforts.

There’s a grab bag of infrastructure improvements that could help reduce CSO events.

“Green” infrastructure, which includes rain gardens, bioswales, pervious pavement, and more, help collect storm water at the source to prevent it from running off and burdening the sewers. In most plans, green infrastructure makes up about two to 10 percent of total anticipated spending.

At what was expected to be one of the final public CSO meetings, NJ DEP Environmental Consultant Michael Hope said that by June 2020, construction plan proposals must be submitted to the DEP for review.

“By July of 2019, every municipality had to evaluate seven different categories of CSO remediation alternatives,” Hope said at the meeting.

In those evaluation reports, consultants broke down a variety of 20-year buildout plans within the legal threshold, ranging from a bare minimum to a full CSO capture rate.

According to each town’s July 2019 reports, which span hundreds of pages, North Bergen will likely have to spend between $70-100 million on improvements.

They’re on the lower end, due to the fact that the Woodcliff Lake Treatment Plant has been undergoing major improvements in recent years.

Bayonne gets a bit pricier, as consultants there anticipate the project costing at least $180 million, but no more than $828 million, according to a CSO team presentation from that time.

Jersey City could be spending anywhere from $515 million to over five billion dollars, depending on whether they choose to capture all CSOs, or meet the 85 percent capture threshold.

Kearny will likely spend at least $100 million to meet the threshold; a 100 percent CSO capture rate there would likely cost about $747 million, according to their reports.

Harrison could be on the hook for costs ranging from $5.8 million to $78.2 million.

While they have held meetings independently from PVSC without providing holistic cost analyses online, the NHSA report submitted to the DEP indicates that each of the multiple scenarios they assessed by July 2019 will easily cost hundreds of millions of dollars.

In a statement, the NHSA described their efforts as “ahead of the curve.”

Each evaluation report, averaging out at about 400 pages, is publicly available online for review, as are the presentations shown at PVSC’s public meetings.

“On June 1, 2020, after a 59-month program schedule, everything needs to be rolled up for a final long-term control plan,” Hope also said.

Hope added that the EPA advises to budget for residential water bills that do not exceed two percent of the median income.

During the transition, Hudson County residents could tentatively see water bills increase six or seven times what they’re used to over the buildout period.

Here’s a breakdown of increased residential water bill costs that those involved in the CSO committee are anticipating by the year 2042.

These costs represent the anticipated future average for a typical single family residence in each respective community.

“When we develop the June 1 report, we will be elaborating much more on the financial capabilities of each town,” Hope said.

“We need to decide what can reasonably satisfy the Clean Water Act requirements, but also what our team members decide is reasonable. I really don’t see these numbers changing much based on the EPA’s formula and what they’re looking for.”

During a public presentation at a North Bergen Board of Commissioners meeting on Sept. 11, Hope said that the CSO committee anticipates zero funding from the federal government to offset the burden of these mandatory sewer improvements.

Municipalities will have to compete among each other to receive loans from an annually rotating DEP fund, Hope said.

“It’s a better rate than you might get through traditional bonding,” he stated back in September. “But, 21 programs in New Jersey are coming to a head at the same time.There will be competition for those dollars.”

Additionally, Hope explained that it’s more than likely municipal utility authorities will also have to budget for improvements that have nothing to do with combined sewers in years down the line.

Hope further warned that, if DEP proposals are not satisfactory, the EPA could intercede in the process through what’s known as a consent decree, and that, in his previous work in other states, the EPA does not have a fiscally conservative track record once they take over.