” .. The New Jersey Department of Transportation appeared to have a complete breakdown in preparation and response to today’s snow conditions. As I write this email to you, we’ve had over 500 car crashes reported throughout the state,” he wrote in the email, which was also sent toÂ Transportation and Independent Authorities Committee Chair Dan Benson.

“Drivers are stranded on numerous roads throughout the state and it is very evident that NJ DOT didn’t properly prepare for the weather despite being aware of the forecast. Although the severity of the storm increased, there seemed to be no ability to adjust and respond to conditions.”

Chiaravalloti continued that a hearing makes sense, given that the “government breakdown” extended to the Port Authority of New York and New Jersey, as well as New Jersey Transit.

The Port Authority Bus Terminal closed due to severe overcrowding yesterday, leaving NJ residents stranded in New York for hours. Those traveling by car didn’t fair much better, with commutes as short as 15 minutes lasting for over three hours.

“The PANYNJ shutting its New York City bus terminal with armed guards and providing no viable options for commuters is alarming. Additionally, the need for the newly rebuilt Bayonne Bridge to be closed because of the steepness of the roadway raises serious safety design concerns,” he continued.

“In a state that regularly deals with major blizzards, today’s response was disgraceful. Our residents deserve better.”

Gov. Phil Murphy (D) was lambasted on social media last night as commuters were stuck in gridlock for as long as seven or eight hours on many of the state’s major highways.

At a press conference this morning, the governor said no one could’ve expected the snowfall the state received, given what forecasters predicted, also noting that New York City and Connecticut suffered similar problems before admitting his administration could’ve done better (h/t The Record).

Coughlin did not immediately return an email seeking comment on whether or not he was considering holding the hearing Chiaravalloti requested. 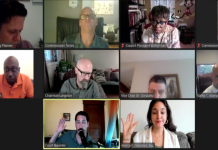