Behind the scenes jockeying is already underway as the Jersey City Board of Education is already beginning to try and figure out who the next board president will be, even though the vote isn’t until 2020. 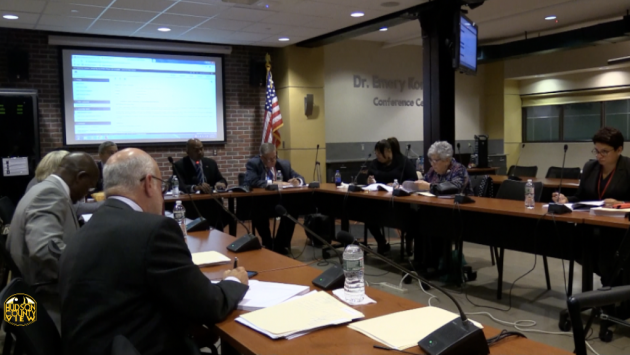 Sudhan Thomas, the current board president, lost a re-election bid on November 5th where voters selected a split ticket: Gerald Lyons, Gina Verdibello, and Lekendrick Shaw from the “Education Matters” team, along with Noemi Velazquez and Alexander Hamilton of the “Change for Children” slate.

Therefore, a logical successor could be Lorenzo Richardson, given that he was vice president under Thomas in 2018 and 2019.

Richardson told HCV that he hasn’t given the subject any serious thought yet, though he expects to have conversations with his colleagues in the coming days and weeks.

“I haven’t given it any thought yet, but I’ll be conferring with board members about it soon,” he said over the phone today.

However, the current VP, who was endorsed by the Jersey City Education Association in 2014 and 2017, has fallen out of favor with the teachers union in recent months, so they would prefer Lyons to chair the board.

Lyons didn’t return a request for comment on Thursday, but sources with knowledge of the situation, who spoke under the condition of anonymity, said that he would be open to the post if approached.

His most likely vice president in this scenario would be Verdibello, sources said.

Velazquez and Shaw were also rumored to have an interest in sitting in being sworn in as board president. Velazquez could not be reached for comment on Thursday, while Shaw said it wasn’t something that was high on his priority list.

“I respect the other individuals that have tenure and the track record, but Iâ€™m not solidified one way or the other, Iâ€™m open right now. Iâ€™m just focused on the superintendent search and the A. Harry Moore situation,” Shaw explained.

Thomas declined to comment on what his preference would be, if any, noting that the decision regarding his successor lies in the hands of the new board and therefore he wouldn’t have anything to do with the selection process.