A judge recently blistered a land use attorney representing the City of Hoboken in a case that centers around using eminent domain to acquire Lot 10 from Academy Bus and making it part of the Southwest Resiliency Park. 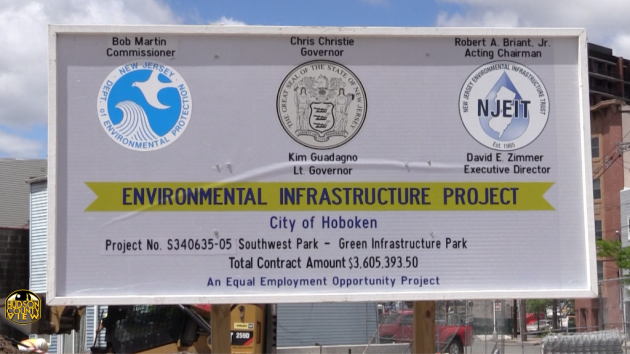 ” … What is concerning to the court[:] there’s a couple issues. And — and while there may be this extensive gap in value I’m perplexed that you relied on, that the city’s relying on an appraisal that they concede is faulty,” Hudson County Superior Court Assignment Judge Peter Bariso said during an order to show cause on November 6th.

The City of Hoboken filed a lawsuit against Jefferson Street Partners et. al, the owners of Lot 10 affiliated with Academy Bus, on September 17th to move forward with eminent domain, just a few days before publicly announcing their plans to broaden the aforementioned park.

The lawsuit is ongoing, though Bariso made it clear that he was not impressed with the way the city has handled the matter thus far, particularly stymied by the fact that the city inaccurately assessed the property at $5.3 million back in 2017 – later proven to be closer to $4.8 million this year.

Furthermore, the court notes that although the city council approved using eminent domain back in February 2017, they were never informed that the property had been reappraised and the value had gone down.

Bariso also seemed annoyed by the fact that 0.8 acres of land the city hoped to purchase had suddenly been designated as an industrial site.

” … Because in the Southwest Redevelopment Plan this property, this carved out area that you’re referring to, your Honor, this 35,000 square feet, was always intended to be a park,” Buzak answered.

Bariso noted that this rationale only made sense if the city acquired the land, since it’s still private property at the moment – though Buzak insisted the city had followed all zoning laws and codes as they related to this piece of land.

Eventually, the assignment judge noted that the whole thing “doesn’t pass the smell test” and therefore he has trouble establishing “trustworthiness” on behalf of the city throughout this proceeding.

In a court certification on October 30th, Mayor Ravi Bhalla asserted that the last negotiation with Academy Bus occurred on June 25th of this year, though the meeting didn’t last long.

Bhalla said in the court filing that Academy had no intention of adhering to the Southwest Redevelopment Plan, pointing out that their plan included building 430 units (the plan only allowed for 192), also explaining that he didn’t ask the council to consider the newly appraised value since it was lower than the initial value.

The mayor also indicated that Academy had received a copy of the latest appraisal on April 10th, 2019 and had not made a counter offer, despite indicating that they would do so in 30 to 60 days.

According to the order to show cause, the summer discussion went so poorly that Bhalla “stormed out of the meeting.”

Buzak noted that while he wasn’t there, that the opposite had happened at a meeting he was attended back in 2017 where representatives from Academy walked out of a meeting convened by former Mayor Dawn Zimmer.

City spokesman Vijay Chaudhuri told HCV that the city remains undeterred and that their ultimate goal in this matter hasn’t changed.

“The city is currently in the process of undertaking good faith negotiations with Academy and is committed to acquiring the property for the fair market value to double the size of the Southwest Park.”

1st Ward Councilman Mike DeFusco, the chair of the council’s Southern Development Committee, said in a statement it was “alarming” to hear that the administration had began an eminent domain proceeding without consulting anyone from the governing body.

“The fact that the assignment judge himself is now questioning the ‘trustworthiness’ of this administration should be concerning to our entire city … The mayor’s decision to quietly bring about another frivolous lawsuit only serves to benefit political connected lawyers at the expense of Hoboken taxpayers.”

In response, Chaudhuri noted that DeFusco had voted three times to execute eminent domain on Lot 10.

” … If he’s too lazy to read the very ordinances he voted on, it calls into question whether he should even be serving on the city council. Furthermore, it’s not just reckless, but it’s a complete abdication of his duties as a member of the City Council that he is now trying to derail the creation of a park for residents of the Southwest to appease his major campaign donor, Academy Bus, which owns Block 10,” he stated.

“The Mayor is looking to build a park in Southwest Hoboken, while DeFusco is once again trying to curry favors from his developer friends at the residents’ expense.”