The Bayonne Planning Board approved the Caschem Redevelopment Plan in hopes of revitalizing the area near the former Texaco site in Bergen Point. 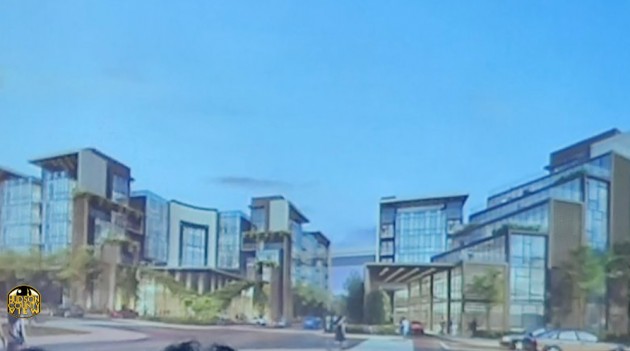 The redevelopment at 35 Avenue A would include two residential buildings on the eastern portion, as well as a waterfront complex on the opposite side, where the former Caschem site was located near the Bayonne Bridge that leads to Staten Island.

City Planner Suzanne Mack emphasized the need to review the plan, proposed by developer Jimmy Gamal, for consistency with the Master Plan.

Mack noted that last week there was a special meeting to approve the 1888 Studios film production nearby at the former Texaco site.

“It has a rich history. It developed as an industrial area … but people lived there. Many people walked to work. Unfortunately, they got repurposed,” Mack said, noting it was abandoned for many years.

The plan is to redevelop the area of Avenue A near the southern border of the city with new storefronts and 320 housing units near the movie studio – which is also near an existing Amazon warehouse.

“I think of it as an entertainment district,” Mack added.

Furthermore, Mack also detailed housing units above storefronts in the plan, along with an open space plan.

She said there would be galleries as well outside near the movie studio in this fashion, along with sidewalk cafes.

“This was not really named in the Master Plan, though. The Texaco site was?” Commissioner Sharon Ashe-Nadrowski, the council president and also a mayoral challenger, asked.

“That’s my concern. Has a traffic study been done? I believe they told us they would have 2,100 employees a day. That’s 2,100 cars in and out of there a day,” Ashe-Nadrowski stated, noting that an Amazon warehouse there has already created a ton of bothersome traffic.

“The residents complained literally every day,” she said about Amazon trucks elsewhere in the city. She also inquired about if an impact study was done, citing overcrowded schools are another concern.

“No, it was not. This plan was sent to us by the council, so this is the plan the council asked us to review,” Mack replied.

“My concern is the car traffic, the truck traffic. because we’re making it more dense than the original study,” Ashe-Nadrowski continued.

To that end, Mack said there was no plan for a traffic study. Consulting Engineer Andrew Raichle concurred that the onus was on the council for approving it.

“We always say we’re taking the advice of the experts on the planning board that the traffic study was done: I don’t see where that’s happening,” Ashe-Nadrowski responded.

“The traffic generation from those 320 units … is minimal compared to what we approved last week for the movie studio,” Mack said, who noted she had traffic engineer qualifications.

“Was a traffic study done then?,” Commissioner Thomas Maiorano asked about the Texaco site.

“It was years ago to tell you the truth. It was approved before I was the city planner,” answered Mack, who said it would not be relevant now when asked another follow-up by Ashe-Nadrowski.

City Consulting Planner Malvika Apte later chimed in that there are currently no three-bedrooms units as part of the plan before Raichle went into more details about how traffic studies typically work.

“The commissioning of the traffic study, for better or worse, occurs at the site plan application level. The tradition has been redevelopment plans are considered without a traffic study.”

During the public portion, resident and political operative Pat Desmond asked Mack if she was familiar with an environmental justice law regarding Black and Brown communities and overdevelopment.

“There’s a lot of Black and Brown communities there and it’s being overdeveloped,” Desmond asserted.

“That other site is not party to this. It’s not the same developer,” Mack said back.

“A lot of little kids live in that area,” Desmond answered.

Mack said she has looked into and applied for grants for the city and the issue he raised was not relevant to this plan.

“It should be a question on this redevelopment. There have been kids riding their bikes getting killed. You need to do something,” asserted Desmond.

Planning Board Chair Karen Fiermonte noted the plan has to go before the council again once it clears the planning board.

“At this point, we’re just changing the zoning in the area. At some point, the developer would come forward with a site plan and that would be what they would asking for. The redevelopment plan is just a framework,” Planning Board Counsel Richard Campisano said.

Ashe-Nadrowski still objected to what was before the governing body on Tuesday evening.

“If we allow them six stories … we can’t change our minds,” she said about what would be developed on the east side of the land.

“They could go down to four stories if they so chose. The board would have a very limited ability to say anything to them unless there were safety concerns,” Campisano indicated.

Ultimately, the redevelopment plan was approved 7-0(1), with Ashe-Nadrowski abstaining.

Late last year, a lawsuit alleged the council violated the Open Public Meetings Act by voting on second reading without having a public portion, though a judge dismissed the case in February.