The Bayonne City Council passed an ordinance amending their cannabis rules for businesses, lowering the fees but still restricting the number of cannabis licenses allowed, while also discussing what the future holds for off duty marijuana usage for cops. 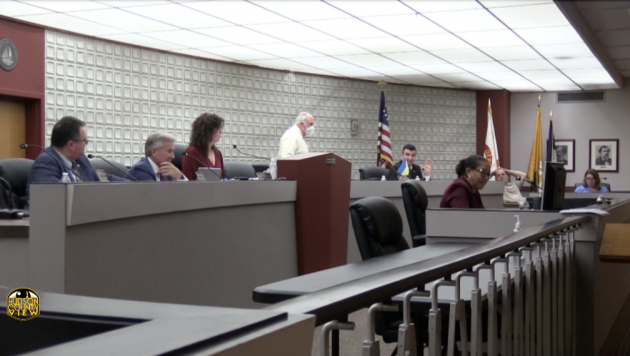 “I would be remiss if I didn’t say it was 4/20, and we’re covering a cannabis regulation today,” Council President Sharon Ashe-Nadrowski said to laughs from the crowd about the traditional cannabis “holiday.”

“I went over this with the Law Department. It’s very necessary. There will probably be more amendments down the road. The state did a lot of tuning of this, and we kept going back and forth, and it kept getting revised. It’s very important since tomorrow is the first day of recreational marijuana in New Jersey to be legal,” added 3rd Ward Councilman Gary La Pelusa.

Resident Gail Godesky praised the city’s police and fire department before asking if they would have special rules or regulations related to their cannabis use.

Jersey City Mayor Steve Fulop said yesterday that their police would not be permitted to use marijuana off duty despite a directive from the New Jersey Attorney General’s Office last week that said all law enforcement in the state were able to do so.

Bayonne Mayor Jimmy Davis, a retired police captain, followed by saying he would support a similar policy in the Peninsula City, though a directive had not been drafted yet.

“We don’t have any official policy yet. I know Mayor Davis, right along with the Mayor of Jersey City, said he would also restrict for the police. I didn’t hear any mention of firemen,” Ashe-Nadrowski replied.

“This is going to be a very hot topic over the next couple of months. There’s no shortage of opinions down in Trenton on how to handle this,” Law Director Jay Coffey said.

He noted it is hard to test for the intoxication of cannabis immediately the way it is for alcohol and get immediate results, also pointing out that cannabis also stays in the body much longer.

Additionally, Bayonne voted to establish a cannabis review board comparable to what Hoboken and Jersey City have (Hoboken also recently passed amendments to their cannabis regulations).

“I agree with everything in here, but there’s a review board in here. And I’m not quite comfortable with the members who sit on the review board, so I’m going to vote no,” Ashe-Nadrowski explained.

The review board has three members: the mayor or his designee, a council member designated by the governing body, and the public safety director or his designee. They will all serve out a four-year term concurrent with the mayor, the ordinance says.

Additionally, if a members of the board are prohibited  from serving due to a conflict of interest, the health officer or her designee shall be appointed.

Applicants must file a preliminary license application with the review board, which will conduct hearings.

Applications must be submitted by no later than June 17th and on July 15th, notices will go out scheduling applicant hearings. The review board will provide scored recommendations to the council to then make a selection.

In addition, companies that are officially favorable towards their workers organizing labor unions would receive “full 20 points for collective bargaining agreement in effect for at least one year.”

A demonstrated commitment to diversity in ownership and hiring practices and whether the applicant is minority, women, or veteran-owned business equal 20 points.

An applicant’s willing commitment to the community and its support for
cannabis education, employment and job training, public safety programs, the Special Improvement District (SID), or other mutually beneficial community investments is valued as well.

After the applicant is issued a license, they need to secure Planning Board approval. The fees are as follows:

Applicants shall be accompanied by an escrow deposit of $7,000 to pay for services rendered during the process.

The Cannabis Review Board shall negotiate a Community Host Agreement with certain cannabis companies establishing the applicant’s willing commitment to the community and its support for, for example, local cannabis education programs, employment, and job training, safety programs, the Special Improvement District (SID) or other mutually, beneficial community investments.

A conditional municipal license will entitle a recipient applicant to pursue a license for up to 12 months, which may be extended for six months.