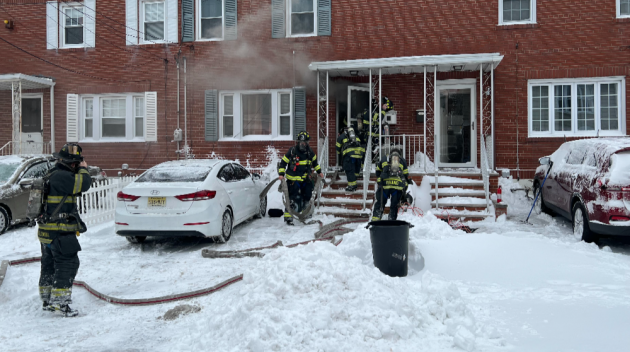 At about 3:00 p.m. today, the Bayonne Fire Department was dispatched to 54 E 14th Street on a reported fire. Firefighters arrived and found a heavy smoke condition with fire in the basement of the one-family attached home, Weaver said in a statement.

Firefighters used two hand lines to extinguish the blaze, which was declared under control at 3:23 a.m. as snow was falling heavily. One resident was treated on the scene by EMS for minor smoke inhalation and released. No other injuries were reported.

The Bayonne Building Department deemed the structure temporarily uninhabitable, and the displaced occupants are under the care of the Bayonne Office of Emergency Management. A fire investigation is underway; however, the fire appears to be accidental in nature.

“Our firefighters, under extreme conditions, worked with skill to rapidly extinguish this fire before it could extend further into the home or into either adjacent home on either side of the structure,” Weaver added.