The Bayonne City Council agreed that they would vote on a $160,467,986 budget and new legal cannabis revisions next week when they set the agenda at yesterday’s caucus. 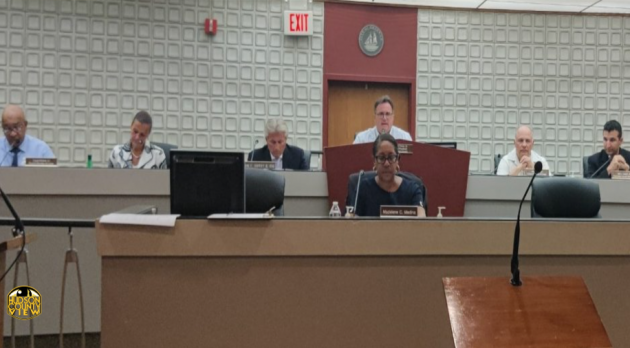 The budget, which passed unanimously (5-0) on first reading, is up from $152,961,751 last year. Municipal employee salaries also increased by about $2 million, while the number of employees dropped slightly from 753 to 752.

Furthermore, capital improvements have shrunk from $850,000 to $300,000 and a tax increase between one and two percent is also anticipated.

“There’s still some things we’re working on. So it’s hard for me to talk about things that aren’t settled yet. We don’t want to raise taxes at all, so if there’s something I can tweak, that’s what we’re going to be going over,” noted Council President Gary La Pelusa.

He noted it’s an ongoing process that will likely continue “down to the wire.”

“I own a home too, so we don’t want to see the taxes go up,” he added, indicating that the nature of inflation necessitates the city to spend more.

The council president also said their spending is subject to change based on what the board of education and county do, though they have already okayed budget’s with a 2 percent and 7.88 percent tax increases for the Peninsula City, respectively.

The governing also appear poised to vote on the first reading of two cannabis ordinances on August 17th: one to establish which zones where cannabis businesses aren’t permitted and another to establish term of license and license renewals, disciplinary actions, sanctions and penalties.

They previously amended their initial cannabis ordinance in April, lowering fees and restricting the number of licenses granted.

He also pointed out that cannabis license applicants for an annual license need to file for one with the municipality first before going to the NJ Cannabis Regulatory Commission.

Bayonne was one of the first towns in New Jersey to pass a local cannabis implementation law. Coffey noted the initial license application fees were indeed significant.

“That didn’t happen organically. That came from lobbyists. Big companies don’t want it so that’s it’s $2,000 to make an application. They want it to be $200,000, so you knock out the five of us, and some rich guys get the license. That’s the real world.”

Additionally, Coffey was unsure how much money cannabis could generate to justify having more dispensaries in the city.

He noted that while Bayonne is only allowing two dispensaries overall in a relatively small district, many municipalities, such as Union City and Weehawken, aren’t allowing any.

“The decision was by the council to not have in the Broadway district. That’s something that could change over time,” noting concerns that long lines could disrupt other businesses.

“The State of New Jersey is making it up as they go along. The legislators did a horrible job of rolling out cannabis. I’m a proponent of the legalization of pot,” Coffey also stated.

Also of note, he said the Bayonne Cannabis Review has not been seated or met yet.

“Once we get this squared away, it’s more likely to meet.”

According to the ordinance passed in April, the Review Board will have three members: the mayor or his designee, a council member designated by the governing body, and the public safety director or his designee.

They will all serve out a four-year term concurrent with the mayor.

“There’s going to be growing pains with this thing, and it will change over time,” he concluded.

Chaparro proof of payment bill would eliminate $75 fines for light...