The attorney representing former Jersey City Employment and Training Program Acting Executive Director Sudhan Thomas in three separate cases is dropping him as a client, alleging he owes over $25,000 in legal bills.

According to the court filing, Adams’ firm was retained by Thomas to represent him in a civil lawsuit filed by former JCETP employee Nuria Sierra, which alleges that Thomas committed financial improprieties while head of JCETP.

GRSD was hired on August 14th, just five days after Sierra had filed suit and about a month after she sent a letter to the offices of the New Jersey Attorney General and U.S. Attorney asking them to investigate Thomas.

Adams further states, through the court document, that Thomas paid his firm $15,000 to represent him in the civil matter, though just over a month later, September 20th, GRSD entered into another agreement with Thomas to represent him in a Division of Criminal Justice investigation.

Upon further negotiations, the firm agreed to accept $10,000 for the DOJ case, and $5,000 for the civil case, retainers.

The DOJ probe led to Thomas being charged on December 19th by the New Jersey Attorney General’s Office with accepting $35,000 in cash bribes in connection to a potential 2021 city council run.

Additionally, Adams continues that Thomas never paid any additional legal fees, even after GRSD was asked to represent him in an investigation by the U.S. Attorney’s Office.

On January 3rd, the U.S. Attorney’s Office charged Thomas with embezzling $45,000 from JCETP, referencing that he wrote checks to cash while head of the agency, one of the allegations Sierra asked to be investigated.

HCV first reported in October that a court filing related to the Sierra case revealed that there was “a current FBI investigation” at JCETP.

“Thomas has also not paid GRSD for any of the work GRSD completed to represent him further in the DCJ or USAO investigations. The initial retainer Thomas paid to be represented in the above-captioned matter has already been earned,” Adams said in the court certification.

“To date, Thomas owes GRSD more than $25,000 and that bill continues to grow each day. There is no risk of prejudice to Mr. Thomas to allow counsel to be relieved at this early stage of litigation, before any meaningful discovery has begun.” 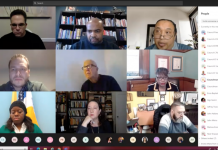