Hoboken Mayor Dawn Zimmer continues to have conflict with members of the city council as two members are hosting a Southwest Park ribbon cutting on Saturday, one day after Zimmer and other officials will host their event. Zimmer, County Executive Tom DeGise, as well as other county and state officials, are expected to attend an 11 a.m. ribbon cutting at Southwest Park, located at the corner of Jackson Street and Observer Highway.

However, Councilmen Dave Mello and Ruben Ramos were not satisfied with this arrangement, so they took it upon themselves to host their own ribbon cutting at Southwest Park at 4 p.m. on Saturday.

They will also be joined by Southwest Parks Coalition Co-Founder John Gregorio and referred to the event as the “real” ribbon cutting celebration in a media release.

In an email, Mello said that he felt this was necessary to maximize turnout.

“This was a community effort, that took over a decade to bring to fruition. To not hold this ribbon cutting on a weekend, when the maximum amount of our friends, neighbors, and fellow park advocates can attend with their children is simply wrong,” he said.

“This will be a celebration where ALL of Hoboken can come together and celebrate a success that everyone worked together to achieve.”

Ramos said over the phone that this was another example of the mayor showing she is unable to work with people, especially since he and Mello had said as recently as Wednesday evening’s council meeting that they wanted the ribbon cutting held in the evening or on the weekend.

Both Ramos and Mello are school teachers and are therefore unable to attend city functions during the day.

A city spokesman declined to address Mello and Ramos’ function in response to the mayor’s planned ribbon cutting ceremony.

Meanwhile, there will also be a Southwest Park opening celebration on Wednesday, September 27th from 4:30 p.m. until 7:30 p.m. The event will include balloon animals, music, food trucks and various other activities and entertainment.

The councilmen breaking rank from the mayor is nothing new, as they were two of the five council members who said they would not approve the new Suez Water deal proposed by the administration.

After a lengthy, heated debate, the agenda item was pulled from the September 6th agenda.

The city council passed the Southwest Park Redevelopment Plan in June after a dispute with Academy Bus over an acre of land.

Zimmer was previously recognized by local and state officials for her flood resiliency plans during a press conference at Southwest Park in May.

Southwest Park is collectively receiving $5 million from the New Jersey Environmental Infrastructure Trust and the state Department of Environmental Protection, while the county also provided a $3 million grant to acquire the land. 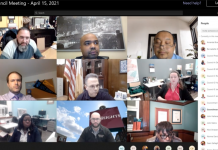 Wefer: HUD is likely going to deem the HHA as a...