“Over the last 10 years, we have spent $111 million on infrastructure projects in our constituent municipalities – $41 million of which has gone to maintaining and improving sewer lines,” said North Hudson Sewerage Authority Executive Director Dr. Richard Wolff.

“As part of our long-term CSO plan, to reduce overflows into the Hudson River, we have undertaken a number of green infrastructure projects, including developing green infrastructure plans for three of our service area municipalities, working with Hoboken and other municipalities on specific projects – like the tension systems, rain gardens, permeable pavement installation, etc.”

The NHSA is located in Hoboken and also serves West New York, Union City and Weehawken.

“This is really a lot of creative thinking and shows tremendous leadership. If you’re looking to define leadership, I think you can look no further than what’s going on here in Hoboken,” she said.

“To think about design, use design as a way to manage stormwater with porous surfaces, with trees and also provide another little delightful respite place for the neighbors and citizens of Hoboken and the people who visit.”

Southwest Park, which broke ground just under a year ago, is collectively receiving $5 million from the New Jersey Environmental Infrastructure Trust and the state Department of Environmental Protection, while the county also provided a $3 million grant to acquire the land.

“And in this park, it will actually have a sensor system that North Hudson Sewerage Authority will be able to control when is the right time to release water back into the sewer system,” also adding that the parks brings much needed open space to Hoboken.

While new flood pumps, another joint effort between the city and the NHSA, have for the most part done their job, flooding can still occur during particularly heavy rainfall.

The mayor said that an “integrated approach” with the flood pumps and the resiliency park should quell those types of scenarios in the forseable future.

“It’s gotta be an integrated approach: the pumps can only pump as much as the pipes can get over to them and, unfortunately, we have a very old system and so we need to combine it,” Zimmer began.

“It’s a combination of pumping the water out, but also holding back as much rain water as possible. These resiliency parks hold back that stormwater before it even gets into the sewer system.”

The Hoboken mayor concluded that the low interest loans the city has utilized to complete the project has saved the city approximately $20 million.

The Southwest Park is expected to be completed this summer, while the Jackson Street Resiliency Park should be finished by the summer of 2018. 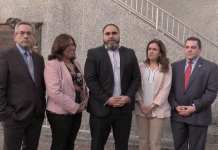 With less than 3% of residents vaccination, WNY officials calling for more doses to fight COVID-19 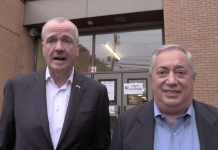 Mandatory minimums bill clears N.J. Assembly, now up to Murphy to either sign or veto