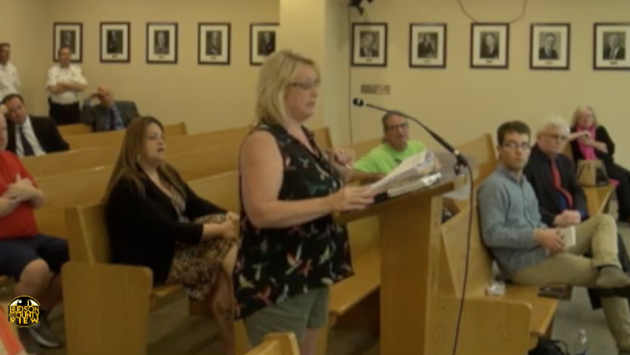 “It was error for the court to find plaintiff failed to comply with her discovery obligations because she presented competent evidence — her and her then counsel’s certifications —asserting she did not have any additional text messages or her phone, and she could not access the message logs,” Appellate Court Judges Michael Oster and Francis Vernoia wrote in a 41-page decision.

“To the extent defendant presented any competent evidence disputing plaintiff’s assertions, the court should have resolved any pertinent fact issues at an evidentiary hearing.”

Percella alleged that Davis sent sexually explicit text messages beginning in early 2013, long before Davis announced he would be running for mayor, and ended in late 2014, about six months after he’d been in office, as she first anonymously told HCV in mid-2017.

She ended up filing a lawsuit in Hudson County Superior Court in January 2018, alleging that Davis abused his office by offering her a $150,000 settlement in exchange for a sexual relationship while she still worked at City Hall.

The former city worker alleged that the text messages were explicit and included phrases such as “I would eat you alive!!!!” and “love that ass!”

The lawsuit was dismissed on February 3rd, 2020 by Hudson County Superior Court Judge Kimberly Espinales-Maloney after determining that Percella had willfully been ignoring discovery deadlines.

“In short, arduous and tortured discovery production is in the rearview and further delay lies ahead. Discovery in this case is on a road to nowhere,” she wrote at the time.

However, the appellate court ruled today that despite these issues should not have led to the lawsuit being dismissed with prejudice.

” … We do not excuse any failure to comply with a court order, but we are convinced the court abused its discretion by failing to apply the appropriate legal standard in assessing and deciding defendant’s motion for dismissal with prejudice.”

As a result, the suit will be sent back to superior court with a different judge to hear Davis and the city’s motion for dismissal, which will decide if a new evidentiary hearing is necessary.

“The mayor has no comment on this decision and will, as always, rely on the court system to adjudicate this matter as it sees fit,” Bayonne Law Director Jay Coffey said in response to the appellate ruling.

“Inasmuch as the City’s motion to dismiss has been remanded to the Superior Court for reconsideration, the City has no comment and will, as always, allow the adjudication of justice to be determined by the Court.”

The city now faces three lawsuits regarding sexual harassment and/or gender discrimination, one from another former City Hall employee and another from current Business Administrator Melissa Mathews.

As ICE controversy lingers, freeholders vote down moving next meeting to...

Caddle-linked super PAC had ties to Hudson the year he paid...