After some Hoboken residents expressed concerns about a potential night life atmosphere similar to Pier 13, the Hoboken Planning Board unanimously approved (7-0) amended plans for a sailing school at Pier 12. 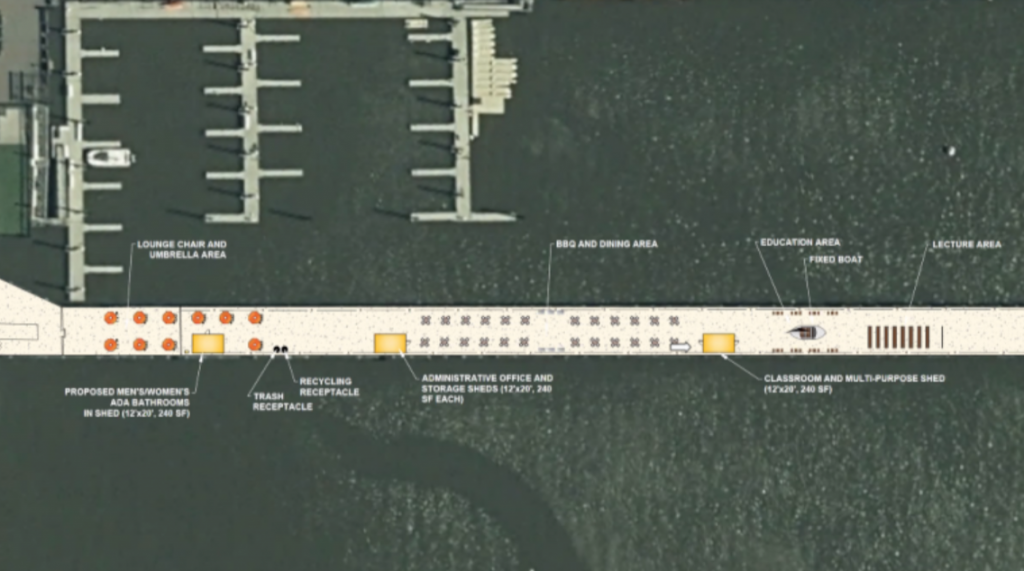 The board amended the plan presented by the nonprofit group Sailing for Students Inc. to ensure it does not become a spot for nightlife, including a provision that they must close by 8 p.m.

Many locals were concerned that it would add to their problems with Pier 13, which they described as noisy and filled with an excessive amount of drunken patrons.

Jason Tuvel, counsel for Sailing for Students, said that while the school has been successful so far, it would be better served by improved infrastructure. The plan for the pier included small buildings for lectures, offices, and storage.

“If the weather turns, there’s a lot of tables out there,” Planning Board Chair Frank Magaletta said.

Nonetheless, Tuvel insisted that no liquor or food would be sold, nor would it be used as an event space.

Sailing for Students General Manager Mark Stehli, who has been operating the school for a year, said the nonprofit would function as an after-school program and field trip location for students.

“Is this just strictly for the students?,” asked resident Adam Kramer, noting that he saw a few gatherings larger than ten people past sundown sitting at the tables throughout the summer.

Stehli said it’s just a place for Sailing club members, to which resident Anthony Rackinelli responded that he didn’t want drunken people on the pier.

“Under no condition will give you them a liquor license?” he asked.

“There’s no intent to do that,” Stehli said.

Robert Verthelyi added that the plan would call for many more people to be present than just those people who are taking the classes.

“If you have 24 students there and both their parents want to come and … this is a place for them to congregate,” Stehli said.

He continued to ask a series of questions about how often parents would be in attendance, who brings the food, why the food is necessary, and asked how they would prevent underage drinking.

“We’re treating this almost like Pier 13, except there will be no carding because three will be nobody to check. What protections do we have?”

“We would abide by and all laws regarding alcohol,” Tuvel said, reiterating that there would be no area for the distribution of alcohol.

Magaletta agreed that while they aren’t serving food or alcohol, there was nothing stopping people from hosting a barbecue or small party on site.

“The problem is there will be the adult sailing club that could bring alcohol. It’s a concern I have as well. This application is for a sailing school, and you have all these tables. It’s counterintuitive.”

Verthelyi followed up by asking if the tabes were “absolutely necessary,” to which he said it was not uncommon for sailing schools to have an area for students to mingle.

“We already have huge traffic issues in the area. Have they been requested to do a traffic study?,” Verthelyi continued.

Stehli answered that most arrive and leave by foot since they live in the immediate area, with chiming in that there is a maximum of 24 students per class and no plan to increase it.

“It’s not intended for this space to be utilized by a student and two parents at all times,” Tuvel added.

Not everyone was opposed to the plan, with Board of Education President Sharyn Angley coming out in support.

“I truly value the partnership between the sailing club and the public school district. I am fully supportive of the improvements for Pier 12.”

“I’m all for the sailing program. I just don’t see [how] there’s a necessity to add a barbecue and a dining area. We already have enough alcohol on the waterfront. We don’t need another pier. We don’t need a fancy sailing club like you have in the Hamptons,” Verthelyi said during public portion.

“The goal is not to be Pier 13 at all. We don’t need six grills. It wasn’t the intent to make this a party event space.”

After the amount of grills and tables were reduced, the plan sailed through without dissent.