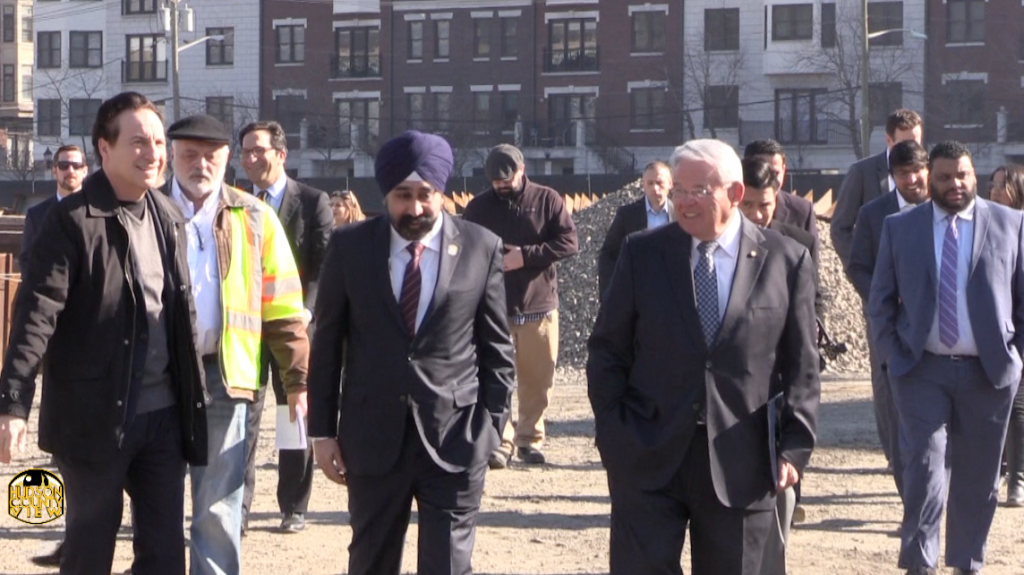 The bi-partisan bill, named the State and Municipal Aid for Recovery and Transition (SMART) Fund, was first announced last month and is co-sponsored by U.S. Sen. Bill Cassidy (R-LA).

The SMART fund would distribute $500 billion – the amount requested from the federal government by the National Governors Association – based on population, infection rate and revenue loss, the senator reiterated today.

“It’s a common sense, reasonable solution … to help beat the virus and put our economy on a glide path to full recovery,” Menendez, a former Union City mayor, said today.

Most notably for Hudson County, the bill, which the senator hopes to include in “Phase 4” of federal relief legislation, lowers the population threshold for funding municipalities in the CARES act from 500,000 to 50,000.

“Every county in New Jersey would be eligible, as well as some of our larger towns and cities,” Menendez said.

Under the bill’s parameters, at least Jersey City, Hoboken, Bayonne, North Bergen, West New York, and Union City would be eligible for funding.

“We need to take a bottom up approach, but with top down relief, and that’s exactly what we’re seeing here from the federal government,” Bhalla said on the call.

Menendez held the call, in part, to shine a light on the tremendous burden that the state’s municipalities are facing as the COVID-19 virus has forced them to expend “enormous resources to fight the virus, while seeing tax revenues dry up due to the economic fallout,” he said.

Crucial revenues that towns and cities rely on – ranging from building permits and inspections, hotel occupancy taxes, and court system fee – among other things – have been seriously impacted by the coronavirus pandemic.

Social distancing guidelines issued by states in March to ease stress on the health care system grounded the economy to a halt and forced much of the countries labor force out of work.

“Tax receipts are unknown at this time,” said Wayne Mayor Chris Vergano. “We don’t know how people are going to pay their taxes if they’re not working.”

More than 40,000 Hudson County residents have successfully filed for unemployment insurance since the COVID-19 crisis began, approximately 6.5% of the countyâ€™s total population, according to recent data provided by the New Jersey Department of Labor.

Meanwhile, municipalities have been forced to dole out major expenditures to combat the virus, whether it be in the form of testing or overtime pay for front line workers, along with other regular services.

This has walloped local budgets. While Hoboken officials couldn’t provide an exact dollar figure to the deficit, they said it was “well above $10 million,” city spokesman Vijay Chaudhuri said, and that the city has been losing roughly $1 million a month. Jersey City, meanwhile, has indicated they anticipate a roughly $70 million budget hole.

Municipalities in other counties in the state are reeling as well: New Brunswick Mayor James Cahill today said his town faces a shortfall in excess of $35 million.

“Hoboken … is in a very dire situation,” Bhalla said today. Parking revenues in the city are down by 75 percent, while fees generated from construction, the local court system, and hotel taxes have also taken a hit, he said.

“That puts us in a position… where we are faced with a very difficult option of drastically cutting areas where we need services, whether its police, fire, public works or imposing a tax increase upon residents in a very difficult economy,” Bhalla said.

“We do not want to furlough or layoff any more workers than we need to, but if we continue bleeding money, that is what the future holds.”

However, the New Jersey Civil Service Commission has indicated they will hear a stay request on the layoffs, according to a letter obtained by HCV.

Meanwhile, Menendez said he expects to formally introduce the bill later this week.

It’s unclear however, if the bill would have bipartisan support.

While the SMART bill will be co-sponsored by Cassidy, it may not pique the interest for the rest of the Republican side of the aisle.

Still, Menendez has said he has been in talks with three other senate Republicans to support the bill, although he did not mention them by name.

“We have a lot of people out there doing urgent work. We’ve had a lot if people laid off, we have small businesses struggling to stay afloat, and the essential services that our residents depend on most are in jeopardy,” he said.

“At a moment when these jobs have never mattered more, the reality is there may not be enough money to pay our police officers, firefighters, and paramedics … mayors are grappling with the tough decisions of what and who might have to be cut.”

â€œSenator Menendezâ€™s bipartisan SMART Fund legislation will ensure our towns and cities get the resources we desperately need to keep law enforcement on the job and in our neighborhoods and urge his colleagues in Congress to pass it,” he said.