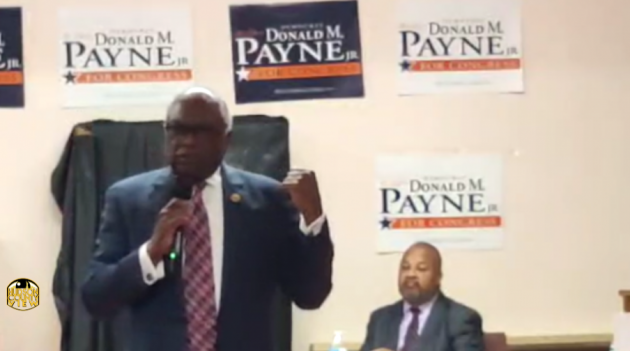 Clyburn noted he was close with Payne’s father, U.S. Rep. Donald M. Payne, who held the same seat his some currently sits in before his passing in 2012. Clyburn noted he got married in Paterson and also spent summers in New Jersey working in textile mills.

“We can decide this election before Tuesday. Don Payne decided that he wants to put a ceiling on the cost of insulin at $35 a month. Insulin has been around in this country for 100 years,” he said to applause.

Clyburn explained his late wife suffered from diabetes as well. On one occasion, she went to the hospital after a bad episode and wanted to take aspirin.

“‘When you see this bill, you’ll see why I brought my own aspirin,’” he recalled her saying. “That’s why we’re trying to make healthcare more accessible and more affordable for all Americans.”

Clyburn also noted his wife had to purchase $1,200 worth of insulin every month to survive.

When Payne addressed the crowd of about 100 people at the Union Chapel AME Church, he said that Clyburn endorsing Joe Biden in the South Carolina primary was instrumental in him winning the presidential nomination.

“This country is great, and I’m not scared to say it. With all it’s faults, it’s great. But it has to work for everybody. The greatness has to be felt by every American,” he said to applause.

Payne said he tried to buy insulin once in Washington after forgetting it in Newark.

“’Well Mr. Payne, your insurance isn’t ready to pay for it.’ I said that’s all right, I’m doing all right. ‘$435 sir.’ Now, what does a grandmother on a fixed income do about that? That’s why we fought.”

Payne also noted he was wearing a boot on his foot due to a diabetic ulcer, later addressing the union membership in the room.

“Working people are under attack. I just had the opportunity to speak to Chris Smalls, who is the young man who organized Amazon. I told him how proud I was of him.”

“We suffered through floodings when the rains came. We all saw it most recently with Ida. But we didn’t need to wait for our Congressman to act. We got $80 million thanks to these two heroes,” he said, gesturing to Payne and Clyburn.

“You all watched the horrors of the last two weeks. Congressman Donald Payne has been there on gun violence and gun safety, yesterday, today, and tomorrow. We’ve all watched the fights for freedom, right, and the inspiration that is the Ukrainian people standing up. I reached out to the Congressman and to his staff and said ‘we have folks with visa issues in particular.’ He’s nodding his head, saying of course, I took care of it. We were able to reassure people who had a genuine fear of having to go back to a war zone.”

“Congressman Payne stood with us on environmental justice … He worked behind the scenes to make sure that vote was happening in Congress at the same time other incumbent Democratic Congressmen north of here were working against the Biden agenda.”

NJWFP faced some backlash online last month when they endorsed Payne over challenger Imani Oakley, who briefly worked for the organization.

Akil Khalfani is the the third candidate in the race against Payne and early voting is underway today through Sunday for anyone who would prefer to vote before Tuesday.