Count Wiley, the West New York Commissioner of Parks and Public Property who is looking to unseat Mayor Felix Roque in the May 12 election, is alleging that a school worker has been threatening teachers to sign Roque’s petitions and/or fill out mail-in ballots for the election – or else they will be demoted or fired.Â Wiley told Hudson County View this morning that he is formally submitting an official complaint with the West New York Board of Education, State Department of Education and the NJ State Attorney Generalâ€™s office over what he calls “illegal politicking” by a school board employee working for Roque’s campaign.

Wiley alleges that Rick Solares, the West New York school district’s head of maintenance, has been threatening, harassing, and forcing teachers and staff at various schools to sign petitions and mail-in ballot applications for Â Roque and his running mates.

The West New York United team, the ticket Wiley is heading, says these actions are in clear violation of this New Jersey law made effective in early 2012:

P.L. 2011 c.204, which was signed into law on January 17, 2012
by Governor Christie, states that no candidate, or holder of elective
public office or that candidate’s agent or representative may solicit,
directly or indirectly, on property owned or leased by the State, or by
any county, municipality, board of education of a school district, fire
district, authority, or any other instrumentality of the State or local
entity.

â€œThese actions by Mayor Roque and his workers will not be tolerated in our school system, nor anywhere in town. Our teachers do not deserve to be threatened, and harassed in their work place,” Wiley said in a statement.

“They are coercing people for their vote. I’ve got to put a stop to this,” Wiley additionally told Hudson County View. “I’m very surprised about what happened in the schools with the past and current OFAC investigations.”

The state Office of Fiscal Accountability and Compliance investigated the West New York school board in April 2013 over allegations that political workers strong-armed teachers and other school workers into buying political tickets.

The Roque administration adamantly denied the claims in the report and no criminal charges were ever filed as a result of the report.

More recently, OFAC began another investigation in September over whether or not the West New York Board of Education properly approved insurance contracts. The results of that investigation are expected to be forthcoming shortly.

Solares declined to comment to Hudson County View, but West New York Superintendent of Schools John Fauta told us that he is currently investigating the allegations made by Wiley.

“These allegations are baseless and if Commissioner Wiley continues to focus on rhetoric, Mayor Roque and his team will continue to focus on results: delivering a zero percent tax increase, a 14.3% decrease in crime, new parks, new roads and [the town’s] first new master plan in 50 years,” said Roque campaign spokesman Pablo Fonseca.

The battle between Wiley and Roque has been uncharacteristically tepid in 2015, but election season looks to be Â heading into full swing as the two will host dueling fundraisers tonight.

Just a few blocks away at Rumba Cubana, located at the corner of 69th Street and John F. Kennedy Boulevard, Wiley and the West New York United team will host a fundraiser from approximately 7:00 p.m. until 10 p.m.

Wiley is running alongside a former mayoral hopeful in Carlos Betancourt, as well as three former board of education candidates in Thomas Leung, Hector Hernandez and Myrli Sanchez.

Roque is expected to formally announce new commissioners Gabriel Rodriguez and Cosmo Cirillo as part of his re-election ticket tonight, as well as naming a fourth member of the slate. 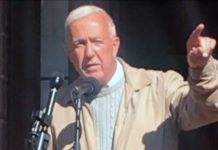