Pat Waiters, a perennial candidate for office in Hoboken and longtime political nemesis of Freeholder Anthony Romano (D-5), has filed a challenge seeking to prevent him from running for mayor. 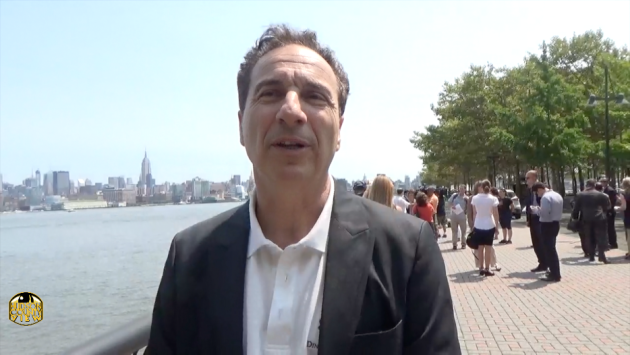 “He is prohibited from accepting the nomination, i.e. being a candidate, for more than one office. The law is clear. His nominating petition is not voidable; it is void by the operation of law.”

As Hudson County View first reported, Dixon wrote an August 22nd letter to the office’s of the Hudson County Clerk and state Attorney General, citing case law that said a candidate could not submit petitions for two offices that would be voted on in the same election.

However, an August 29th response from from Hudson County Counsel Donato Battista said that state law only currently prevents dual office holding, not appearing on the ballot twice.

“Had the Legislature intended to prohibit candidates from running for more than one office, it would have specifically done so,â€ Battista wrote.

â€œIt is likely that the Legislature was aware that there would be times such as this where a candidate would seek to offices at the same time; it is not unusual.â€

Dixon also notes that Romanoâ€™s situation is different than that if Assemblywoman Sheila Oliver (D-34), who has been tapped to run as the Democratic lieutenant governor candidate by Phil Murphy, since she was only nominated by petition for her Assembly race.

The attorney initially said he was representing an anonymous resident of Hudson County, but on Friday his client was revealed to be Waiters.

Waiters challenged Romano in the Democratic primary election for freeholder, losing handily, 4,032 votes to 998, according to tallies by the Hudson County Clerk’s Office.

Nevertheless, Waiters has continued to badger Romano at Board of Chosen Freeholder meetings and recently filed an ELEC complaint against him based on a lack of campaign filings.

During an August 18th appearance on Hudson County Review Live, Romano said he felt his critics were “deflecting from the issues” and noted that Mayor Dawn Zimmer didn’t back out of the race until after the June 6th primary.

Romano also said on the show that if he had to choose just one office to run for, he would run for mayor.

Pablo Fonseca, Romano’s campaign manager, has previously implied that 1st Ward Councilman Mike DeFusco is behind the challenge seeking to get Romano out of the mayor’s race.

DeFusco has been a consistent critic of Romano since his mayoral campaign launched, putting out a number of public statements slamming the county official for not being able to make a choice.

â€œAlthough I welcome all candidates to the race, the simple fact is that Freeholder Romano can’t simultaneously serve as Freeholder and Mayor, and thus is prohibited from running for both at the same time according to state statute,â€ DeFusco said in a statement last week.

â€œCompelling legal questions aside, this decision sends a terrible message to voters by reinforcing old stereotypes about politicians cutting back room deals and thinking the rules donâ€™t apply to them.”

The DeFusco campaign has denied that they had anything to do with the challenge, despite the fact that Waiters of a supporter of the councilman’s mayoral bid.

The Romano-DeFusco feud will continue to intensify on Wednesday, when the top-tier mayoral candidates host dualing fundraisers.

LETTER: Team Murphy is the only real choice for New Jersey...