The Jersey Journal’s veteran political columnist Augie Torres, who has worked for the publication for 41 years, has confirmed he was victim of the newspaper’s most recent set of layoffs: September 4 is his last day.

Torres’ “Political Insider” column has been a signature column of the journal for years, using historical references and humor to keep readers aware of the ever-changing political climate in Hudson County in a light-hearted manner.

Politico first reported yesterday that Torres would be leaving the paper in September. While Torres did not return calls for comment from Hudson County View, he posted a lengthy Facebook post last night to address the situation.

“I’m officially gone as a JJ employee after Sept. 4. Whether I continue writing columns for nj.com is a question. If I do want to continue writing, I have been provided some options by some good people in different media outlets, mostly online,” Torres wrote.

“I’m really surprised on how quickly those offers came. It’s all a matter of whether I want to, well, retire, or keep my hand in the ‘sport’ a little longer. Deep down I think I should leave it to some young blood who are proving to be pretty good at their craft.”

Torres adds that he had fun with his job and urges his readers to “not make this a wake.”

According to sources, who spoke under the condition of a anonymity, Torres was not the only one to receive the axe during the latest round of cuts at the historic Jersey Journal – which has been around since 1867.

The recent layoffs totaled about 10 employees, which also included their assistant managing editor of production (commonly referred to as the night editor), as well as their marketing director.

The Jersey Journal’s office moved from Jersey City to Secaucus in January of last year, the first time they changed headquarters in nearly a century, and the Advance Publications newspaper continues to produce and distribute a print edition six days a week, Monday through Saturday. 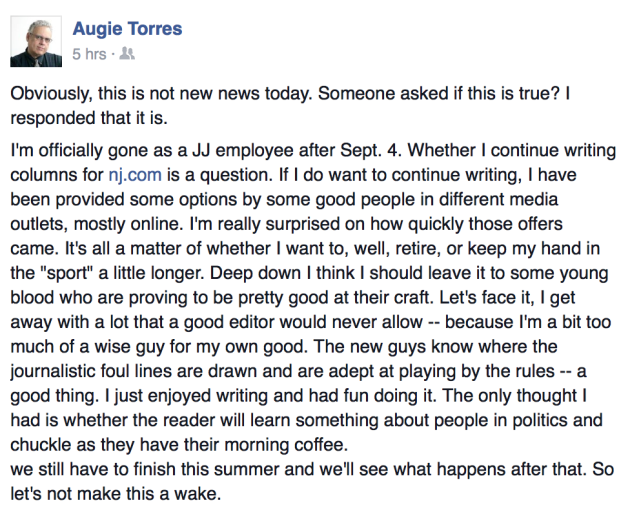