The Union City Police Department is seeking the public’s help to locate a 65-year-old missing woman who suffers from dementia.

Maria Polo, 65, of Union City, was last seen near the intersection of 44th Street and Palisade Avenue last night and was gone when her family members woke up this morning, according to information the UCPD released on social media.

She was last seen wearing a multi colored shirt, black pants, and pink sandals and suffers from dementia, police said.

The UCPD urges anyone with any information on her whereabouts to please call 201-865-1111. 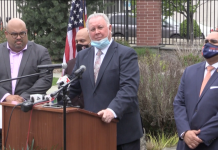