A  Ukrainian solidarity fundraiser at the Ukrainian Community Center last night met their fundraising goal of $5,000 for victims of the Russian invasion. 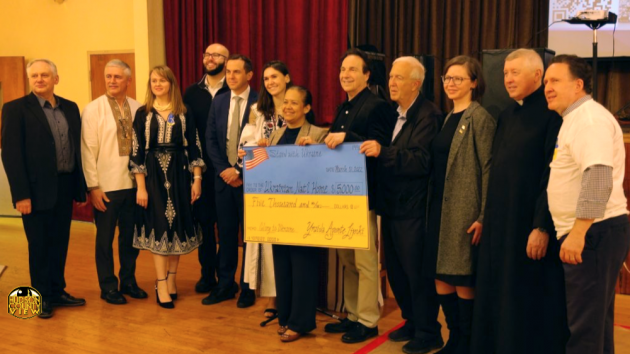 It was held at the Ukrainian Community Center and organized in part by Hudson County Commissioner Yraida Aponte-Lipski (D-4).

“Russian military forces destroyed our schools, churches, theater, hospitals, maternity hospitals, and our homes. Russia is killing our children, men, women, elderly people. Ukraine is bleeding but we are fighting back.”

Despite having no direct connections to the Ukraine, Aponte-Lipski said she wanted to do her part to help.

“It’s really sad that that’s happening right now and how a diabolic mind could do things like that. This could be in my country or anybody else’s country who is here.”

“I’m a grandson of immigrants to this country from Sicily when it was a war-torn country. Why in 2008 when this madman took Georgia … no one said anything. He took the Crimea and we didn’t say anything,” he stated.

Romano said the United States must help with air support, also condemning Russian generals as part of a massacre of innocent women and children.

“The City of Jersey City stands in solidarity with Ukrainian residents. The United States needs to welcome victims of war. Jersey City is very proud to have accredited representatives … to help those seeking it,” Jersey City Director of Immigrant Affairs Michael McLean said.

McLean also noted that the immigration process is very complex in terms of the nuances of welcoming refugees versus religious minorities and tourists. He was there to answer questions for immigrants people might have regarding helping friends and family leave. McLean recently helped an Afghan family flee the Taliban and settle in Jersey City.

Speaking of the atrocities of war, UNWLA branch 143 President Oksana Bats noted Russian soldiers raped a woman in front of her 6-year-old child.

“We are unbreakable. We will resist. Ukrainians all over the world, we stand with Ukraine,” she said.

Refugees from Ukraine have already started arriving in Jersey City, as noted by five different families that had fled the war in Ukraine.

“We are mobilizing into a true army of volunteers. I come to understand what sanctuary city really means,” explained Jersey City Board of Education Vice President Natalia Ioffe.

She noted she is a Ukrainian immigrant who has been working to organize support and solidarity, continuing that she know truly knows what a sanctuary city is.

“Ukraine is truly is fighting the fight of the world. It is a fight for democracy,” she added.

“I was in their place once in 1972. I was a refugee from Uganda,” she said, further stating her family was split up as they fled the regime of Idi Amin who turned against the Indians who had settled there when both nations were part of the British Empire.

“My doors are open to you,” Desai said to the refugees.

“I feel tremendously blessed,” Lipski added, pointing out that he grew up and often runs by the Statue of Liberty in Liberty State Park.

“To see the statue and what it represents, it would be hypocritical for me not to do anything,” he said.

Lipski was there to help organize his wife’s event. He noted they met their goals to raise $5,000 to help victims of the war.

Rob Menendez, who is running for the seat in 8th District congressional seat his father, Bob Menendez, held before becoming a U.S. senator was present as well.

Ioffe praised him for supporting their calls for a no-fly zone.