At least two police officers have been shot and several local schools are on lockdown due to an active shooter in Jersey City, multiple law enforcement sources confirmed. 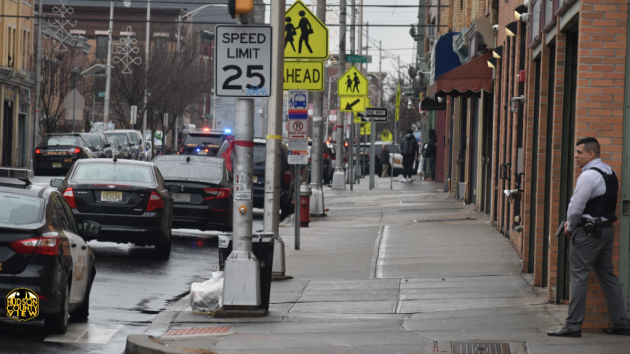 The first shots fired approximately an hour ago, with two gunmen opening fire from a storefront at 223 Martin Luther King Dr. At least one person at that location appeared to have been shot, sources said.

They also indicated that at least two officers had been injured since the situation began. The severity of their injuries were not immediately available.

Several people on the scene, who spoke under the condition of anonymity, said they believed the shooters may have been running guns into Jersey City.

Both shooters were identified as â€œdownâ€ by law enforcement sources around 2:30 p.m.

Jersey City Board of Education President Sudhan Thomas said that Lincoln and Snyder High Schools, along with Public Schools No. 12, 14, 29, and 41, are on lockdown as a result of the incident.

The Bayonne Board of Education also announced on Twitter that all schools were placed on lockdown as a precaution.

â€œThe situation in Jersey City remains fluid and we are working closely with our local, county, state, and federal partners to ensure the safety of everyone involved,â€ New Jersey Attorney General Gurbir Grewal said in a statement.

â€œPlease keep the officers of the Jersey City Police Department in your thoughts and prayers as they work to resolve the situation. We remain, as always, extraordinarily grateful for their service and their sacrifice.â€

Shortly after 3 p.m., law enforcement sources confirmed that one Jersey City police officer had been shot fatally and that the NYPD bomb squad was on the scene to inspect a device found on the van the shooters arrived in.

Jersey City Mayor Steven Fulop said in a tweet that while the scene remains active, schools are secure and parents can pick up their children as they normally would.

Editorâ€™s note: This story has been updated with new information.