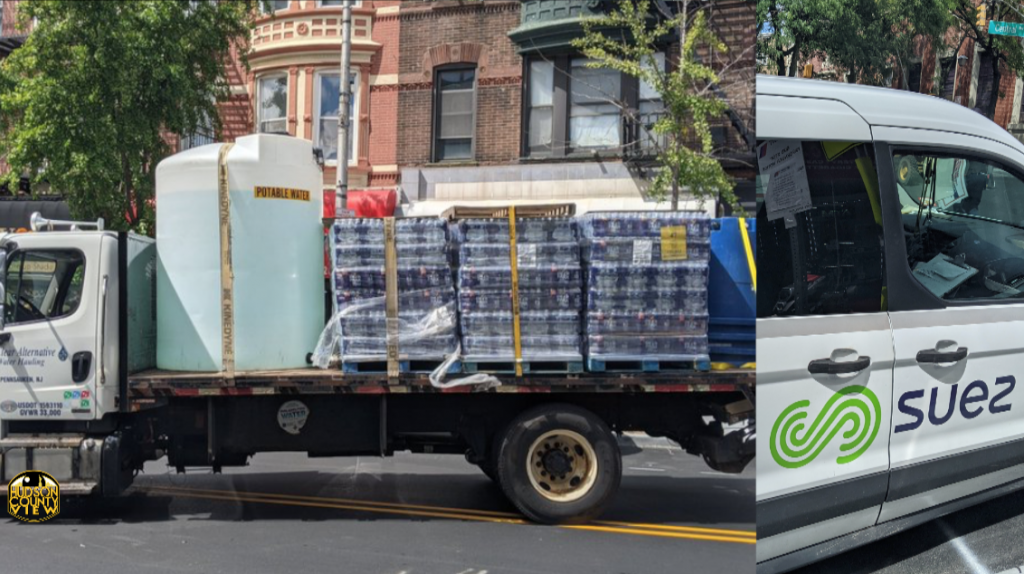 The advisory was issued after the Cedar Grove aqueduct, which supplies water to Jersey City and Hoboken, was damaged by heavy rains and needed overnight repairs.

Initially, Suez indicated that they would be distributing bottled water in each Jersey City ward, as well as at Hoboken City Hall, before pushing the time back to 10 a.m. and not listing any Hoboken locations.

Not a single Jersey City location received water until around 11 a.m., with Wards D, E, and F waiting much longer.

Bottled water was distributed near Newark and Jersey Avenues at 11:45 a.m., but ran out in just 10 minutes and robust supplies didn’t arrive until 1 p.m.

Suez Vice President of Utility Locations Steve Goudsmith said bottled water was “difficult to procure” due to the demand across the East Coast.

“Bulk bottled water in the numbers needed for Jersey City and Hoboken has been difficult to procure. There are several other water systems along the Eastern seaboard that have been affected by system interruptions and boil water advisories and have ordered large amounts of bottled water, as well,” he said in an email.

“We have worked with multiple vendors and suppliers to get as much water as we can and continue to work the supply chain. Bottled water continues to be delivered and distributed, as it becomes available. We have also deployed water tankers for additional supply.”

Ward E Councilman James Solomon, who was providing regular updates on Twitter, called the situation “woefully mismanaged” and vowed to get answers on what happened.

“To be clear, no one in Jersey City should ever have to boil their water to know it’s safe to drink. It is apparent that SUEZ’s plan to get clean drinking water to Jersey City residents was woefully mismanaged. A four-hour delay to deliver such a necessary service, after a night to prepare, is categorically unacceptable,” he stated.

“Today, I remain focused on making sure my constituents have access to clean drinking water. In the coming days, I will get to the bottom of why this disaster happened; make sure SUEZ and all parties responsible are held to account; and ensure that it never happens again.”

While Suez apologized to Jersey City residents for the gaffe just after 11 a.m., they faced a whirlwind of criticism for their lengthy delays in providing clean water.

“This is the 3rd citywide water supply issue in 18 mos for JC (Apr 20 no water, Aug 20 e coli water, now this). The fact that @SUEZwaterNJ cannot figure out how to handle water distribution is completely unacceptable,” tweeted Meghan Howard Noveck.

“The callous indifference Suez shows towards the people in this city is simply ridiculous. It’s really only a matter of time before someone gets seriously hurt by their actions,” Amy Wilson told HCV.

Mayor Steven Fulop indicated that he’s seriously considering terminating the city’s deal with Suez over this matter, something he will discuss with the city council after going to most wards to oversee the water distribution today.

“I called the CEO of Suez and expressed the fact that we’re going to have to discuss our ongoing relationship with the city council. We’re all tired with Suez’s performance and we’re not going to allow residents to be treated this way,” he said over the phone.

He also pointed out that the water distribution at the City Hall Annex in Ward F was initially so unpredictable, city officials decided to order water pallets directly from Tropicana.

Last August, Suez was taken to task in Jersey City for issuing a boil water advisory three days after a test indicated E. coli was in their distribution system, leading to some officials testifying in front of the city council the following month – a charge that was led by Solomon.

In March, a letter to Jersey City Municipal Utilities Authority customers said that the authority, whose contract is operated by Suez, failed to meet public notification requirements after the positive E. coli test.