The body of recently deceased pop culture icon Joan Rivers was cremated at North Bergen’s Garden State Crematory on Saturday before her funeral at the Temple Emanu-El in New York’s Upper East Side yesterday, The New York Post first reported.

Rivers, who began her career in the entertainment industry in 1965, passed away at the age of 81 on Thursday after a botched throat surgery at Mount Sinai Hospital in New York, per The Associated Press.

The host of the E! network’s “Fashion Police,” a program which ripped or praised celebrities for how they were dressed at red carpet events, was 81 years old when she passed.

The Associated Press also reports that celebrities such as shock jock Howard Stern, actors Hugh Jackman and Matthew Broderick, as well as moguls Donald Trump and Steve Forbes, were just a few of the notable faces that attended Rivers funeral. 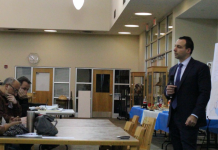