A Brooklyn man who fled from Port Authority police earlier this afternoon was caught outside a Jersey City Target, with cops finding two machetes, a folding knife, bat and marijuana inside his car, authorities said. 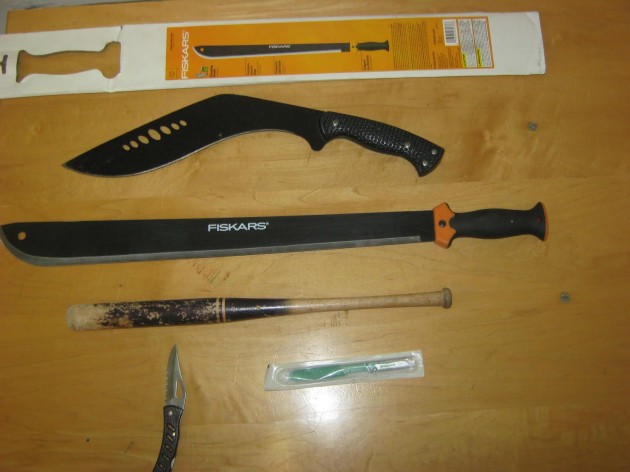 Gregory Jean, 28, of Brooklyn, New York, was charged with a multitude of crimes including eluding police, weapons possession, receiving a stolen license plate, marijuana possession, possession of drug paraphernalia (1 “grinder”), reckless driving, failing to comply with a police officer, possession of controlled dangerous substance in a motor vehicle, having an unregistered and uninsured vehicle and using a fictitious license plate, according to Port Authority police spokesman Joe Pentangelo.

A uniformed Port Authotrity officer signaled for the Nissan to stop. The Nissan slowed down, but then drove away from the officer, who was on foot, officials said.

Jean drove into a nearby Target parking lot where he jumped out of the car and began walking into the store entrance as a full description of both the vehicle and the suspect was broadcast by additional officers, authorities said.

A cop spotted Jean, who began to run away heading east on Washington Boulevard. As he ran, he was removing pieces of his clothing, police said.

The officer caught up with the suspect on Washington Boulevard on the east side of the Target store and Jean was placed under arrest, officials said.

He indicated that he ran from police because the vehicle had no registration, also admitting to having two machetes in the vehicle, authorities said.

Furthermore, the vehicle’s rear license plate was fictitious, coming back to a Toyota vehicle. Jean also admitted that he had stolen that license plate in Belleville, prompting the Port Authority police to notify Belleville authorities, police said.

Another stolen plate from Dumont was recovered inside the car so the the Dumont Police Department was notified. Also inside the vehicle, two machetes were found along with a small bat, a folding knife, a scalpel and two marijuana cigarettes, officials said.

Jersey City BOE has 2 upcoming hearings before vote on next...