This morning at about 8:30 a.m., Bayonne police began speaking with a 28-year-old Jersey City man on Brady’s Dock, located near the intersection of 1st Street and Broadway, officials said.

The man displayed “erratic behavior” before walking down the dock and jumping into the waters of the Kill Van Kull, police said.

Both officers, Timothy Sullivan and Jeffrey Kaiser, jumped into the waters in full uniform and rescued the man, where all three men were later transported to the Bayonne Medical Center for hypothermia, authorities said.

The Bayonne Fire Department responded to the incident as well, offering a ladder for the two officers to climb out of the water, officials said.

One additional officer was taken to the hospital “for treatment of injuries resulting from the incident,” police said.

No charges were issued against the Jersey City man, authorities said. 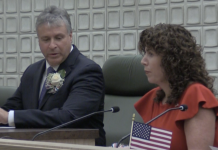