In an editorial, Jersey City Chief Municipal Prosecutor Jake Hudnut, also a Ward E council candidate, explains how the police department and the community at large can benefit from jiu-jitsu training and a return to foot patrols. 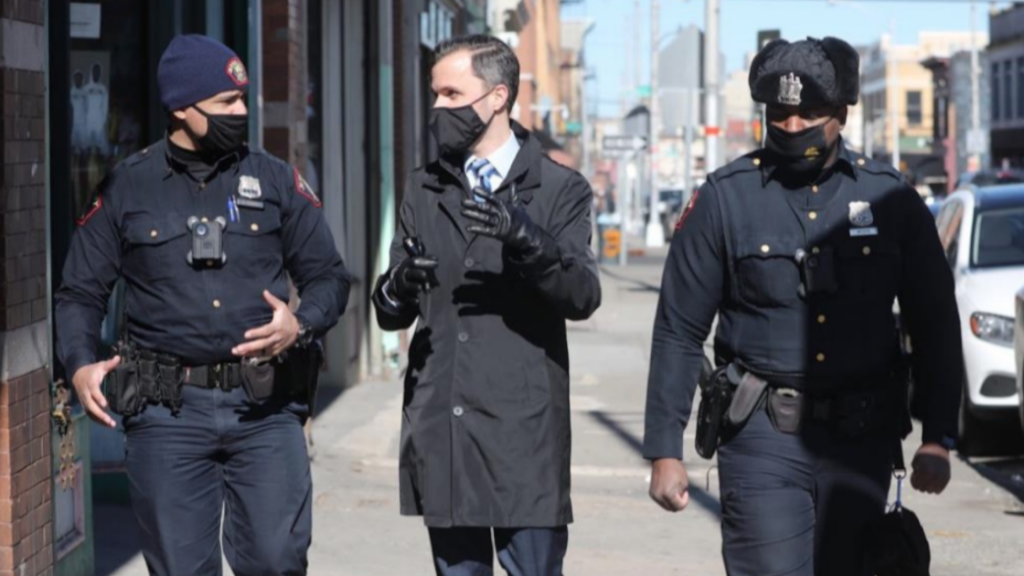 I came to the role of municipal prosecutor in 2018 having served as a passionate public
defender. While some saw it as a substantive change in my work, I did not.

As a public defender I helped one person at a time, as the city’s prosecutor I am helping even more people.

It meant I could focus on investigating and prosecuting those who take advantage of our residents: slumlords, public nuisance businesses, and other violators who disregard the people they should be helping.

I found myself working side-by-side with some of the very police officers that I had aggressively cross-examined for years in court.

But working with the JCPD leaders, I was able to achieve buy-in on new ways to address these issues. I also compelled them to consider new approaches to other standing issues: decriminalization of simple marijuana possession and the role between police and civilian code inspectors.

I did this through creating a culture of mutual respect.

The national conversation to defund the police is heard in municipalities everywhere,
but few in Jersey City truly want our police to be without the resources to keep us safe.
But it is clear that the time for positive change has come.

Rather than defund the police we can rethink the police. There are many solid, progressive steps we can take toward that aim. As councilman I will engage my unique relationship with the JCPD and work with my partners on the city council to implement reform.

I propose two areas of reform that are within reach:
• Proper training to reduce the use of force
• Renewed commitment to foot patrol.

INNOVATIVE TRAINING TO REDUCE USE OF FORCE

No conversation on police reform is substantive without addressing police use of inappropriate force. Traditional police use of force relies on techniques that include striking, body locks and the use of weapons such as batons, leather straps, and too often, firearms.

Inadequate training is the main factor that leads to inappropriate force from otherwise
good-intentioned officers.

That is why I propose we better equip our officers to handle high-pressure situations with principles drawn from martial arts such as Brazilian Jiu-Jitsu.

Unlike traditional policing techniques, Jiu-Jitsu relies upon weight and special control tactics to subdue combative suspects without using force to beat them into submission or applying dangerous holds. This is an approach being taken by proactive municipalities across the U.S. and is achieving significant reductions in use of force incidents.

Committing to the idea that officers need more training, let alone training based in a
non-traditional martial art, is bold. In New Jersey, officers are required to take three
hours of continuing law enforcement training every year, and defensive tactics are not
mandated in that continuing education.

Moreover, the average officer in the U.S. gets only four hours of defensive tactics training every two years, so implementing a real martial arts training program will fill a needed gap.

And it must include scenario simulation to get to the point where a trainee’s first automatic response to unexpected, high pressure situations is to use that skill rather than use a weapon.

In neighboring Bergen County, Elmwood Park implemented martial arts training last
year and Marietta, Georgia, a city of 65,000, has a police department committed to this
innovative training as well.

If Jersey City takes the lead in implementing this type of proactive police reform, we will be setting the standard for bold change and be among the largest cities in the nation to implement this.

While training will incur additional expenses, and requires taking officers off patrol and
away from their tours for training, the benefits far outweigh the cost. Marietta’s police
department had a 48% reduction in officer injuries and a 53% reduction in injuries to
suspects in the first year of training.

Giving officers more training and these alternative tools will change the relationship between police and the public in Jersey City and set a new standard in our
state and country.

As your councilman I will be a fierce advocate for martial arts training for the JCPD.

A RETURN TO FOOT PATROLS

Policing in the late 19th and early 20th centuries in America and the UK centered
around “order maintenance,” and was done through foot patrols.

Officers walked assigned beats, knew the neighborhood, and connected with community members. The idea was that a regular presence in the streets not only promoted public trust (a strategy called “policing by consent”), but also reduced disorderly behavior and prevented more serious problems like burglary.

Efficacy was not measured on the number of arrests, but by the absence of crime.

But in the mid to latter parts of the 20th century, policing shifted from this crime-
prevention model to a crime-fighting model. With 911 systems, police became less proactive and more reactive.

The introduction of the automobile isolated police officers inside their radio cars, who sat in them, waiting to respond to a crime in progress. The controversial war on drugs shifted police resources to plainclothes stakeouts of drug sales and street arrests of drug users.

With this shift, public trust in American police slowly eroded, especially in our cities. And
it isn’t the fault of the men and women in uniform, who risk their lives for us. The responsibility lies with the culture from the highest ranks above those officers.

As we begin rethinking the police, we must return policing to its earliest principles.

We need to assert that foot-patrol, problem-solving, attending neighborhood association
meetings, and engaging in order-maintenance are not signs of being soft on crime, but
are instead an effective way to regain the public’s trust, respond to communities’ specific needs, and even prevent serious crime.

That is why as prosecutor I successfully lobbied the JCPD to create a Quality of Life
Unit.

This is a progressive, problem-solving, community-driven police operation tasked
with identifying and investigating negligent property owners, absentee landlords,
commercial bad actors, public nuisance bars, and other disorder violations that disrupt
our residents’ quiet enjoyment of their homes and streets.

The police officers of the QOL this unit trouble-shoot hand in hand with civil code inspectors and social service providers to address the most intimate neighborhood issues. This police unit and its partners work toward a safe, clean community for all of our city’s residents.

The philosophy of the Quality of Life Unit must become the standard for the JCPD.

Dispatchers must be properly trained not to dissuade callers from reporting these
quality-of-life complaints.

My proposal would establish a beat unit or foot and bicycle patrol, separate from existing patrol car units that respond to 911 calls for serious crime.

All police officers both in and outside of these specialized units will be taught local ordinances to address quality-of-life complaints confidently and capably.

They will be trained so they can respond with education before enforcement and with summonses if warnings are ignored.

Simply put, we must show that problem-solving policing is important to our community’s
relationship with the police, as well as another effective tool to use against more serious
crime.

As Municipal Prosecutor and chair of the Quality of Life Task Force, I’ve seen the best
side of policing while addressing thousands of matters throughout the city.

Together with the JCPD, I have answered calls from desperate residents whose landlords forced them to face freezing winters without heat, or harm children in apartments with falling ceilings and vermin.

We’ve rescued caged animals from abuse in the hands of owners and drove out of town a local polluter, whose operations filled residents’ homes with hazardous dust.

As councilman my role will change, but my experience in the trenches with public safety
puts me in the unique position to bring about necessary police reform that will positively
impact both our community and our officers.

This is why I am the right choice as the Ward E Downtown council candidate. There are
meaningful police reforms that are needed right now, but we won’t get there by vilifying
the men and women sworn to keep us safe or shouting at them from the sidelines.

We will get there by coming together for collaboration and common-sense solutions. That is
the change I will create.