In a letter to the editor, recent unsuccessful independent Hoboken council candidate Josh Einstein says that the infamous “terrorism” flyer distributed days before the municipal elections was made to hurt 1st Ward Councilman Mike DeFusco’s campaign. 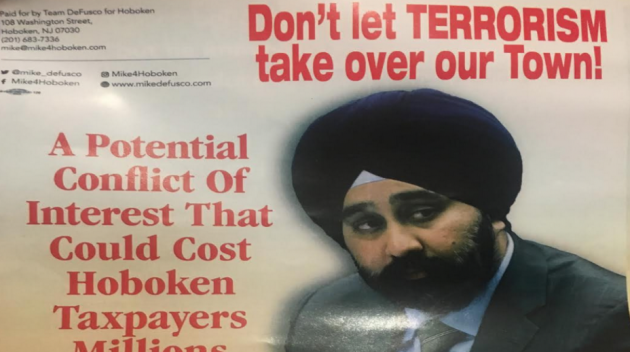 I didnâ€™t vote for Councilman Michael DeFusco in his recent Hoboken mayoral run, I didnâ€™t like his platform, I was not a fan of the negative tenor of his campaign, and I do not find much to like in his council and zoning board record.

Yet I am compelled to state that not only was DeFusco the principle victim of the bigoted flier that the media, hyper-partisan, low information, and intellectually lazy assume was targeting mayor-elect Councilman Ravi Bhalla as well as the very real fact DeFusco may have lost the election because of it.

The flier which labeled an Indian-American Sikh a terrorist is bigoted both because it plays on the presumed inability of people to distinguish between the Dastaar (Sikh religious turban) and forms of Islamic headdress as well as peoples presumed pre-existing conflation of Muslims and terrorists.

This begs the question, who would think this sort of naked bigotry would find support in cosmopolitan Hoboken? Considering that according to the 2010 Census 77.5% of Hoboken has a college degree and 53% works in New York City (the defacto global cultural capital with thousands of ethnicities), Hobokenâ€™s residents are clearly educated, enlightened, and worldly â€“ not the type inclined towards the bare-naked bigotry the flier engages in.

Undoubtedly, there are some who assume that the flier was meant for the allegedly less worldly â€œOld Hobokenâ€ whom many wrongly stereotype as provincial and nativist in attitude.

That typification is ridiculous, as a group heavy in Italianâ€™s and to lesser extent Irish and Peurto Ricanâ€™s, whose ancestors (some just a generation ago) left their homelands to travel thousands of miles to a new land with a different culture to join the mainland USA melting pot (and who faced a fair amount of bigotry in the process) is a group that is inherently culturally extroverted.

Moreover, even were this pernicious lie believed, and Old Hoboken assumed to be the bigots they are not, than the DeFusco camp would be an odd place for them to rally as he is gay (a group not often liked by the bigoted).

All of this leads one to ask, what benefit could DeFusco have in attaching his name to a bigoted flier attacking Bhalla? Clearly, the answer is not only none, but that doing so would obviously hurt his campaign.

Still there are some who argue that since each campaign seems to have had morally questionable people in their orbit, one or more of these types of characters from the DeFusco camp may have been the source of the flier.

Yet it is painfully obvious that even the most intellectually and morally challenged campaign volunteer or professional would never use a legal campaign name behind the back of their candidate nor do something of this magnitude.

The only logical conclusion is that the bigoted flier was an attempt to hurt the DeFusco campaign.

The massive backlash against its presumed creator (DeFusco) as well as the hundreds of thousands of dollarsâ€™ worth of free media his main competitor, Mayor-election Ravi Bhalla, received are evidence to support this.

As the Defusco and Bhalla campaigns had the largest war chests and a great deal of out-of-town support, itâ€™s no surprise they did both did better than the other campaigns.

Considering Bhalla only received roughly 484 more votes than DeFusco it is a very real possibility that the bigoted flier tilted the balance of undecided voters to support Bhalla and drove unmotivated voters who may have otherwise stayed home but whom leaned Bhalla to actually go out to vote.

LETTER: ‘I pledge to keep fighting in Congress for the values...