In a letter to the editor, Jersey City Board of Education candidate Natalia Ioffe is recognizing the goodwill efforts of Lacovia Wilson, the parent council president of Public School No. 29.

When every day seems to bring new reports of urban violence and acts of terror, it can give way to fear and despair. With no easy answers or solutions in sight, retaining hope for a brighter future becomes a challenge.

However, there are people living among us who make it easier to believe in a better tomorrow. These people are “the helpers.”

In the wake of the somber anniversary of 9/11, the media recalled an excerpt from an interview with a beloved television personality Fred Rogers.

In it Mr. Rogers remembers a time from his childhood when news of disasters and tragedy would come on television. His mother would tell him to look for the helpers so as not to be afraid. He speaks about the importance of showing the rescuers and those who try to aid and comfort the victims of tragedy.

“If you look for the helpers,” Mr. Rogers says, “you’ll know there is hope.”

Our communities are filled with modest heroes who live each day trying to help others, desiring no publicity or fanfare. One of them is Lacovia Wilson, a Jersey City resident, a graduate of Lincoln High School and a parent council president at P.S.#29.

Lacovia has long been a driving force for good, rallying her community behind her, in order to help those in need. Among her initiatives are distributing food and “blessing bags” to the homeless, coat and blanket drives, free haircuts and a sneaker giveaway at the start of the school year for the children who cannot afford them.

I was very honored to be invited to Lacovia’s sneaker giveaway which took place on September 10th at Monticello Avenue, and to see for myself how happy it made the children to get a brand new pair of sneakers to kick off the new school year.

When people asked Lacovia what church or group she was doing this for, she would simply smile and say that she is a part of “Covie Cares”. “Covie” is in fact short for Lacovia, and she in herself is a force for good.

Serving as Parent Council President of her children’s school she manages to care for the school the same way she cares for everyone else she helps, with selfless energy and good humor. Her efforts as a parent volunteer were recognized by the Superintendent of Jersey City Schools in a Special “Liberty Lives” episode.

As we read the recent news of yet another senseless tragedy, we must not despair. The past is filled with acts of violence and terror, and the future may be as well, but through it all, there are always helpers, like Lacovia Wilson.

As long as there are rescuers doing their jobs, and ordinary people going above and beyond to help their fellow men – there is hope. Let’s keep our eyes on them.

Jersey City Board of Education candidate 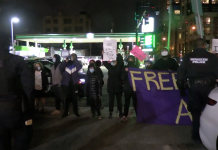