In a letter to the editor, West New York Board of Education candidate Melinda Saunders says she will be an advocate for the children of the school district, and no one else, if elected.

I started to write this letter numerous times. Each time, I hit the backspace button and started over.  It is a challenging letter to write because I want to describe myself as having many different roles which bring different skills, but I am not a politician.

I am a woman. I am a mother. I am a home owner and tax payer within West New York. I am a businesswoman. Again, I am not a politician and to be honest, I would not have previously thought I would be on an election ballot.

Nevertheless within the past year, my experiences as a mother have made me frustrated with the Board of Education. I feel that change is needed for West New York’s schools, and firmly believe that I am that person to make the change.

With my successful career in the private sector, I feel I can bring new perspective. I am not aligned with other special interests in the town. As a businesswoman, I can clearly see the need to create financial transparency, responsibility, and accountability with our school’s administration.

Last year, my oldest child was enrolled within the Pre-K 4 program within the West New York school district.  I was perhaps naïve by believing that I was sending my child off to school each day to a school district that had his best interest in mind for his educational growth and safety.

Throughout the school year, I started to gain more knowledge on how the school was managed both financially and administratively.  I began to question how much the town’s influence had on the decision-making process.

After having my emails go unanswered by the superintendent, I started to attend the Board of Commissioners and Board of Education meetings to understand what was happening within the district.

I was surprised that I could get mass telephone calls from the school district on community events, but had to search online to understand when and where the public meetings were being held.  As a parent, I hoped that this information would be proactively provided to help strength the engagement of families and the school.

Attending the Board of Education meetings was a real eye-opener. I learn that our public school employees have been working without a contract since July 2015. I heard that our teachers are not being given a raise.

I saw teachers marching in protest and became worried about what is happening in our district. After I started attending these meetings, I saw gaps within the engagement of the BOE trustees during these meetings. I felt that financial data was not transparent and had not been reviewed with other trustees and members of the board prior to the meetings.

After reviewing the minutes from the meetings, I became frustrated. I felt that only some of the decisions were being made in the best interest of our children.

More recently, I was shocked to see the preliminary state-level PARCC results for our town (Partnership for Assessment of Readiness for College and Careers). The data suggests that West New York students are not being adequately prepared for college.

It seemed that we are setting up our children for failure in this competitive and complex world. The Board’s response to the report was even more worrying.

It seemed that the Board felt these results were not alarming. As a single mother raising two first generation black Hispanic children, I feel that I understand the concerns of many West New York residents.

However I disagree that our children should settle for less because of their ethnicity or economic background. The children of West New York deserve more!

I believe that the only way to fix these issues, is to be a part of the change.

If elected to the West New York Board of Education, my responsibility is to the children.  I will be an advocate with their needs in mind.  Our district needs to develop children by increasing family engagement while being financially responsible.

This is why I am asking for your vote on November 8th.

Melinda Saunders for West New York Board of Education 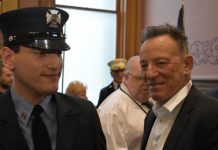