The Jersey City Council held their third ad hoc committee meeting on Suez Water’s Hurricane Ida response this morning, where the head of the municipal utilities authority indicated the city’s sewer and water systems are in need of massive repairs. 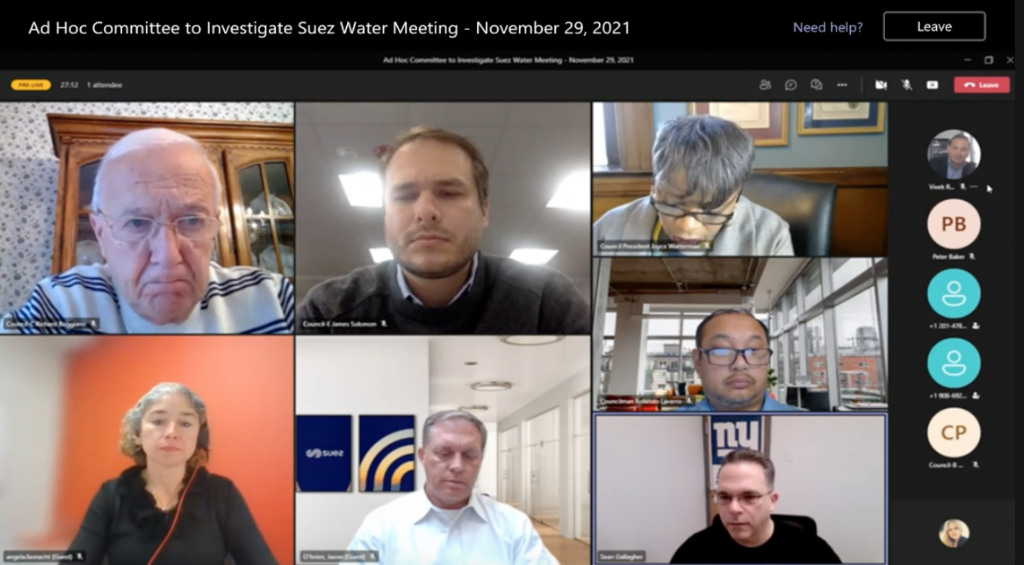 During the just under an hour-long hearing, Ward E Councilman James Solomon asked James O’Brien, the Suez Vice President and general manager who oversees their Northeast region for environmental services division, to explain infrastructure and water main breaks dating back to April 2020.

O’Brien said at that time, vibrations from nearby construction caused a drop in pressure in the water system, which increased the potential for contamination and led to a call for a boil water advisory.

In August, O’Brien said a positive E. coli result was found. However, it did not occur due to a water main break.

“We do hundreds of bacteria samples every month,” he said.

“Unfortunately, sometimes, when you have these events, you do a detailed analysis, and you don’t find how or why there was an E. coli in that sample. And that’s what happened,” O’Brien replied.

He added that they submitted the data to the state and that Christ Hospital put new devices on its water main to prevent such issues.

“That’s helpful to know. Do you have a sense of where the most at-risk water mains are?” Solomon continued.

“I would say yes,” O’Brien said, noting that the system is old in general.

He then asked Jersey City MUA Executive Director Jose Cunha to walk them through the day-to-day infrastructure.

“The state of our infrastructure … varies widely in age, but for the most part, the youngest pipes are no younger than 20 years. A lot of it goes back 100 plus years,” Cunha replied.

“Where did that figure come from?,” Solomon asked regarding the repair budget for the water.

“It’s everything we know that needs to be fixed as of right now. We don’t have a small amount of work here to do,” he added. “The water system has been so dependable for so long that it was unfortunately neglected a bit comparatively because the sewer started failing so much more quickly.”

He noted the sewer system handles much more capacity than it was designed to do.

Cuna noted that the Boonton dam in the reservoir from where Jersey City receives its water is more than 100 years old, so they’re closely monitoring it. Thus, they were quickly alerted of a hole caused by a boulder during Hurricane Ida, which caused an issue.

“We’re not comfortable with leaving everything fine, status quo. We’re going to fix and bring up everything to the point that it needs to be,” Cuna said.

He explained that part of the problem with the water system is that the pipes have become clogged due to a mineral that has grown within them and severely reduced the system’s capacity.

“As you can imagine, it’s a serious problem. We are literally pulling water lines out of the ground on a daily basis,” Cuna said.

“What is MUA’s responsibility when it comes to the long-term health of the infrastructure, and what is Suez’s?” Solomon asked.

Cuna noted that Suez fixes smaller pipes, while the MUA is responsible for fixing larger pipes and the treatment plant.

“We try to work together on a daily basis. Suez is very much abreast of what we are doing.”

“Are there any more specific concerns that are systemwide?” Solomon questioned.

Cunha said they are concerned with the aqueduct that brings water to the city.

“It’s the lines that are further out like the aqueduct which took a boulder in it. We rarely have that condition happening in the city itself,” he said.

Cunha noted that the federal facility of the Picatinny Arsenal might be causing issues with certain chemicals in the water.

Solomon said he hoped that funds would be available through the infrastructure bill that passed and could be used to address the situation.

He noted the next Suez committee meeting will be on January 14th which will give Suez, the Department of Public Works (DPW), and the Office of Emergency Management (OEM) time to devise water distribution emergency communications plans.

The final meeting of the committee is scheduled for February 7th.

City Clerk Sean Gallagher noted that to reconvene the committee next year when a new council term begins, a resolution has to pass the council giving it the authority do so.

Police: Hoboken man busted with 88 bags of heroin at Journal...