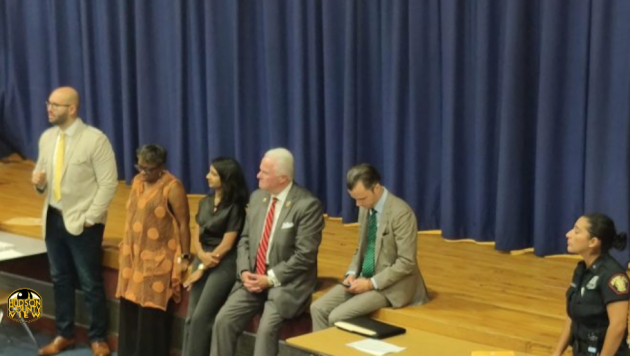 At the beginning of the public session, which was hosted at Christa McAuliffe School at 167 Hancock Ave., Infrastructure Director Barkha Patel updated the community on the Reservoir 3 repairs.

“We have substantially completed the first phase of construction … We’re working on making the entirety of the path walkable,” she said.

In response, Cynthia Hadjiyannis, of the Reservoir Preservation Alliance, asked about repairs to the Reservoir’s gatehouse and tower.

“I’ve been begging the city to do something about the structures inside the reservoir. I’d like to see the millions of dollars that I helped, begged for … to be spent on those structures being restored,” she said.

Hadjiyannis also asserted that her organization has been asking for a meeting with Patel for two months, to which Patel said those buildings are on schedule for completion.

“I’m committed to meeting with the alliance, to meeting your board members, and including you in design decisions,” Patel replied.

A representative from the police department also discussed recent crime in the area.

“We have seen a couple of burglaries and robberies. The summer has been hectic,” Community Relations Officer Glenda Icabalceta, of the Jersey City Police Department’s North District, said.

“What are some ways we can prevent our homes from burglaries?,” Saleh asked.

“Close your windows. Unfortunately, it could be your neighbor. All they’re waiting for is for you to come out,” Icabalceta answered.

“Be friendly with your actual neighbors. If you know your neighbors, you know who stands out. If you see something, say something. Cameras are very important.”

One attendee asked about regulations on electric bikes, specifically when they’re riding on sidewalks, to which Icabalceta said they don’t have a large bike patrol, but people are ticketed for these types of offenses when possible.

“There are no bike lanes on Central Avenue. It’s supposed to be ‘share the road.’ We have UEZ (Urban Enterprise Zone) funding… so that we can have officers on Central Ave,” Saleh added.

Another issue was street paving, for both safety and convenience issues.

“PSE&G came and ripped up the streets a couple months back to do their fine work. The roads are a mess … between JFK [Boulevard] and Summit [Avenue]. It’s not paved. We have nothing … but danger,” Bette Sussman said.

“I’ll share with the councilman our paving schedule for the rest of 2022, but this is obviously a bigger problem,” Patel responded, noting they want to hold meetings with the utility companies to coordinate activity.

Sussman also complained about the noise from low flying helicopters, to which Saleh said there’s a “Stop the Chop” movement to address this issue.

“Right now, they’re going really close to people’s homes. We’re working with Congressman [Albio] Sires,” he said regarding the issue, noting it is a federal issue.

Furthermore, they plan to work with Rob Menendez, the 8th District Democratic congressional nominee in light of Sires’ retirement, once he is in office so that he will introduce a bill to address helicopter regulations, Saleh explained.

“It’s cheaper to cut through our neighborhoods. There’s not much we can do at the local level. We have talked to governor,” the Heights councilman also explained.

“If we could put something in place so that it’s less of a surprise going forward. The timing of it was very, very poor. We had two or three weeks before it was due. The water bill was the same way,” one resident said, to which Saleh said he’s working with the utility company to address the issue.

“Are you guys happy with the sanitation? They do a horrible job. They used to have a broom, a shovel,” Joe Webber said.

“That’s the bane of my existence,” Department of Public Works Director Greg Kierce, who also runs the Office of Emergency Management, said, who stated that Regional Industries, the waste removal contractor, is short-staffed.

“If you email me a complaint, I’ll follow up on it,” Kierce added.