Jersey City Together (JCT) held a forum at the Joseph H. Brensinger School, also known as Public School No. 17, about the progress of replacing lead pipes in the public schools. 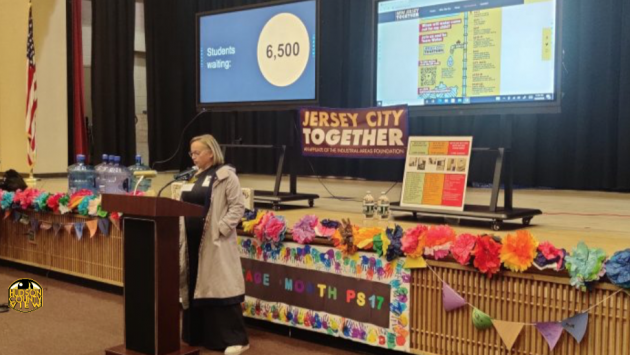 “Our infrastructure is very old. More than half of our buildings are more than 100 years old. Being so old that brings other challenges too,” Superintendent of Schools Dr. Norma Fernandez said.

She explained that the district would have a definitive timeline in the near future.

The first phase of lead pipe removal, which began in late 2019, to the benefit of 13,000 students in 17 public schools. The second phase, which would help 6,500 students in about a dozen schools, is in the works. Fernandez said it would be completed by June 2023.

However, the details of the third phase, which would benefit another 6,500 students, are yet to be announced.

“Jersey City Together leaders fought to get the school district the money it needs, and we worked to get the district to spend it equitably on critical needs, like providing clean, safe water fountains for all children in our district,” said Jim Nelson, a leader with the JCT Education Team, said.

“That system of delivering five-gallon jugs are not sustainable. Investing in the infrastructure is not only the right thing for healthy safe water … but also addresses the backache of moving jugs of water.”

He noted that the jugs delivered were quickly emptied. They also had delivery problems where sometimes the shipment was not delivered without much of an explanation. Once delivered, they were very heavy for janitors to put them into coolers.

“Since returning to in-person learning, we’ve had water coolers that are broken, coolers with pieces of plastic floating in them,” said Dana Patton, a JCT Education Team Leader and parent at Public School No. 5.

“We’ve had kids getting in trouble filling their bottles from the bathroom sink. Even with the coolers, parents are not sure they’ll have access to clean water every day.”

“Five years into the process … we don’t have any more urgent issues than ensuring you guys are healthy and safe .. Until that list of kids goes from red to green, we’re going to keep demanding a trial.

JCT parent advocate Danielle Walker explained she has three daughters who went through the city’s public schools. She said she bought two large packages of water bottles from BJ’s every week to keep them hydrated.

“My daughters didn’t get to experience drinking clean water (at school). Water is just as essential throughout the school day as a stellar education. If our kids are dehydrated, if our kids are, you know, starting to have headaches, simply because they’re thirsty I think that is a problem, and we are all failing our students. This is great progress. The work continues.”

JCT has championed this cause since 2018.

Ward F Councilman Frank “Educational” Gilmore, Ward E Councilman James Solomon, and Ward B Councilwoman Mira Prinz-Arey were all present to get a first hand update on the situation.

“The MUA is wonderful I look forward to this project coming to completion. These commitments are great, and it’s also good to hold people accountable: The district is doing a great job,” Prinz-Arey said.