Jersey City Together hosted a Zoom call on housing issues to assist renters and homeowners coping with the impact from the COVID-19 pandemic. 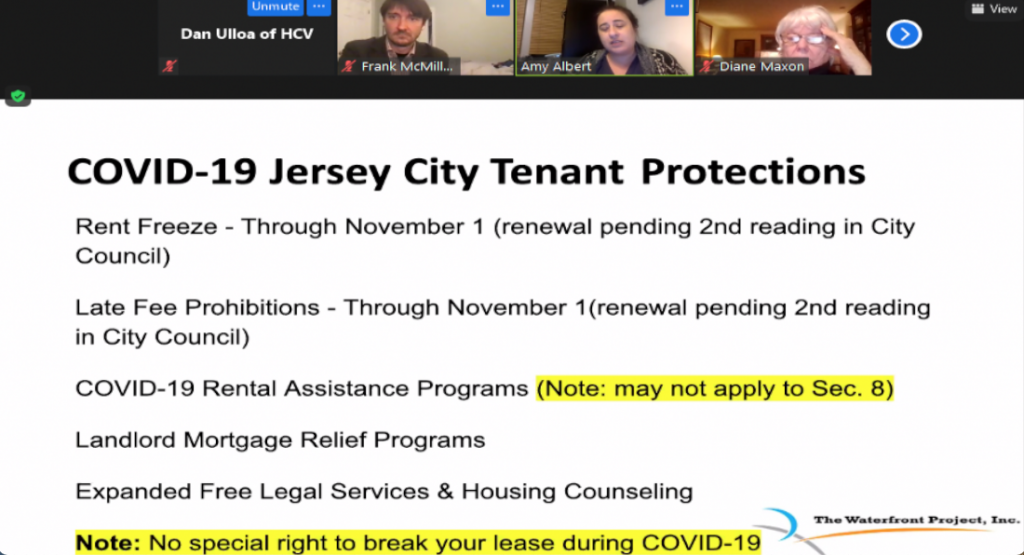 Amy Albert, the staff attorney for non-profit group The Waterfront project,  led the virtual discussion. She noted that both homeowners and renters face serious issues that her employer tries to prevent free of charge.

The Waterfront Project recently teamed up with the Hudson County government for the “Foreclosure Prevention Project” to assist homeowners struggling with their mortgages.

During the call, Albert noted that Gov. Phil Murphy’s (D) Executive Order 106 says no one can be forced from their home until 60 days after the current state of the emergency is over.

In other words, there is a moratorium on evictions currently in effect. Albert said you only could be removed if you’re violent and endangering other members of your home, as well as that a lease does not need to be renewed to at this time in New Jersey.

“A housing court judge is the only one who can tell you you’re evicted,” Albert said.

She noted landlords cannot lock the doors of a home without going through the court process and that such an action can lead to their arrest.

In terms of going through the legal process, landlords are filing non-payment proceedings, but no trials are going on. Rather there is remote remediation, so it is still possible for tenants receive eviction complaints and summonses from their landlords.

Albert said there are 20 remediation conferences a day for tenants and landlords, both usually unprepared, where trained court officials handle the cases instead of a judge.

If a deal is reached, it’s put in front of the judge by phone. Mediation is not mandatory, she also noted. No law says people are required to make a deal. Unfortunately, Albert said they are getting mixed messages from the Hudson County courts about this.

“This is concerning for a lot of reasons … There’s a process and a procedure that must be followed through the court,” Albert said, noting that not everyone’s first language is English and some remain unaware of the eviction moratorium.

“I really recommend they call a lawyer for free legal services,” Albert said for those faced with eviction.

She encouraged people to reach out to her for assistance at the Waterfront Project to cope with any housing issue: her office number is 551-256-7578.