Jersey City Police Chief Philip Zacche is ready to call it a career after 38 years, retiring effective June 1 and owed nearly $513,000 for hundreds of unused sick and vacation days. “We thank Chief Zacche for his 38 years of service to the people of Jersey City and the men and women of the police department,” Mayor Steven Fulop said in a statement.

“In partnership with Chief Zacche, we have been able to grow the department to its largest size in two decades, build the department to better reflect the community, add more officers to walking posts, and work to steadily reduce crime.”

Fulop also noted that the city has has hired more than 250 new police officers, the majority of which were during Zacche’s tenure as chief, bringing the department to a total of 922 officers – the largest in about two decades.

The mayor further stated that he is confident the city will meet a goal of 950 total officers in the department before the end of the year.

“It has been truly my honor to serve the people of Jersey City and to work with the men and women of the finest police department in the state and to have the privilege to serve as their chief,” Zacche said in the same statement.

“I thank Mayor Fulop for this distinct opportunity and while I am looking forward to spending more time with my family and my newborn grand-daughter, I will look back with a lifetime of memories and always be proud for what were able to accomplish together.”

According to the city’s $572 million user-friendly introduced budget, Zacche is owed $512,620 for 450 unused sick and vacation days – one of the most lucrative sick payouts in the state according to a recent analysis by NJ Spotlight (the 2017 figures were not yet available when they performed the study).

Furthermore, as chief, Zacche was credited by the mayor’s office for making intelligence-based policing a focus, adding to the department’s ability to target the most violent offenders and prevent violent crime before it occurs.

Effective June 1st, the administration will kick off a national search for a new police chief and will be accepting applications from both within the department and outside the department searching for the best applicant.

The applicant period will conclude on August 1st, at which point the administration will interview the most qualified applicants. 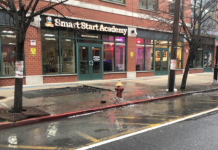