The Jersey City Planning Board approved their first Latino-owned adult-use dispensary, despite opposition from board of education trustees and parents over its proximity to a school. 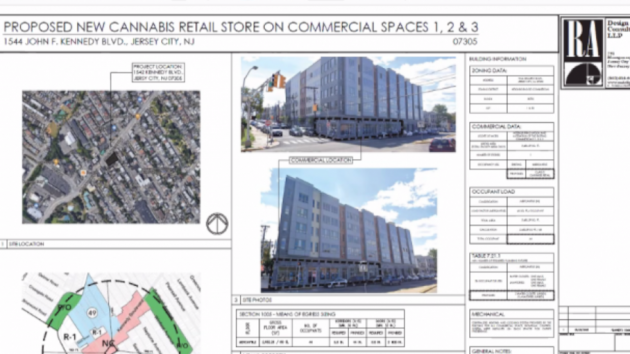 “This is probably the 15th application we have heard. This board is to limit itself to the zoning and the zoning requirements and the conditions of the conditional use,” Planning Board Counsel Santo Alampi said.

“We are proposing a rehabilitation of a commercial space,” said architect Raul Cabato, also noting the space was previously unoccupied.

“The owner has requested we redact details of the vault. There is no consumption proposed in this establishment,” Cabato explained.

“Is it a secure door?,” Planning Board Chair Christopher Langston asked.

“It will be sealed and only used for emergency,” Cabato replied.

“How does staff get to that meeting room?,” Langston asked

“It’s also available to the public. There is a corridor here. All the doors are secure. They are controlled by touch pads,” Cabato said.

Langston said to redact anything on a site plan is “a red flag,” though Cabato continued to defend it as a security measure.

Furthermore, the state has mandated that dispensaries are not allowed to have see-through glass windows.

Supervising Planner Matt Ward noted the unredacted version was not submitted, though Cabato showed them the plan.

“The community room … would be used for community education, job placement, things of that nature,” Aloia said.

“Is there security film on that area?,” Ward asked.

“Yes, there will be security film throughout,” Cabato said.

During public comment, several expressed dismay about the locations proximity to a school.

“There is a school in the vicinity, only two blocks. It is one of the best schools in Hudson County. I am a parent of a child going to that school,” Nirvi Shah said, referring to the Alexander D. Sullivan Elementary School – commonly referred to as P.S. 30.

Alampi again emphasized that the Planning Board was not the place to debate the merits of cannabis versus the city’s new Cannabis Control Board, as well as that the proposed dispensary is located more than 200 feet from the school.

Thus, there is no conflict under municipal law.

Nevertheless, BOE Trustee Lorenzo Richardson said a dispensary this close to the school could lead to a “dangerous situation” and also called it “a recipe for disaster.

Richardson also claimed the dispensary could lead to the schools losing federal funding though did not go into the details of how that would happen.

“It’s still in close proximity to that school and that school has a lot of federal aid. We ask you that you wait,” added BOE Vice President Gina Verdibello.

“I have concerns about this being so close to a school, I am very fearful,” added BOE President Gerald Lyons, who also said the community room could be used for “nefarious” purposes.

“Since the building’s completion, there is a noticeable increase in debris,”

Frank Falcicchio chimed in that there has been an increase in debris since the building was constructed and worried that the dispensary could lower the price of their homes.

“My children go to the school nearby. My concern is if it’s in the public viewing where the children walk. There’s going to be impaired driving around,” stated Karishma Rath.

United Food and Commercial Workers International Union (UFCW) Organizer Hugh Giordano took offense to many of the comments made up to that point.

“As a union representative that represents these workers, these comments are an attack on working people. Most of these people have degrees. To make it seem like a type of crack house … is kind of upsetting to hear.”

“We want to put our full support behind this establishment. The UFCW fully supports the Cannabis Place,” Giordano added.

The Cannabis Place 420 Corp. has signed a Labor Peace Agreement (LPA), allowing its workers to organize a labor union if they choose

“I want to thank the public for coming out. But this body has to follow a city ordinance. This just doesn’t stop here,” Commissioner Vidya Gangadin, a former board of education president, said.

“It must feel at times we don’t listen. The next couple of steps will determine whether this facility will open up or not. I wish we could do more for the public,” Commissioner Joey Torres said before voting aye.

“Unfortunately, I have to vote aye,” Commissioner Jeff Allen said.

“I hear the public. This complies with those zoning laws. This is the easy step. The Cannabis Control Board and the state licensing dives further in,” Langston said.

“4 1/2 hours of my time wasted. One person spoke in favor of this resolution and he’s from South Jersey. All other speakers spoke out against it. We were told that they are in compliance with zoning laws so it passed,” Lyons wrote on Facebook last night.

Port Authority only allowing PATH workers 10 paid days off to...