The Jersey City Planning Board approved two adult-use cannabis dispensaries to operate in the Heights section of the city during last night’s meeting. 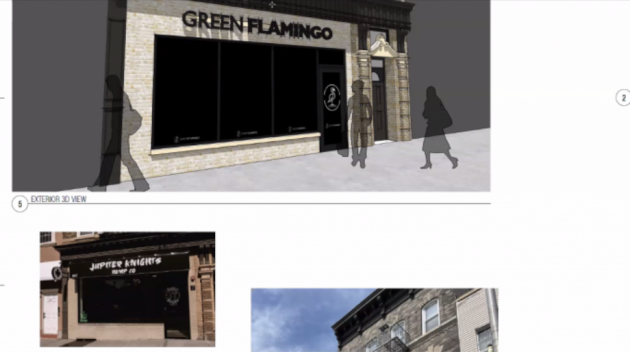 The first application was for Uforia LLC. The owner is Bashkim Spahi and the dispensary would be located at 138 Griffith St., in the Heights off of Central Avenue.

In addition, they were the 167th license approved by the New Jersey Cannabis Regulatory Commission (NJCRC) during their October meeting.

“The applicant is only proposing minor alterations,” Rosen noted, explaining that their location is currently a vacant storefront.

“All the proposed alterations to the property are for the interior,” architect Greg Korn said.

He explained there would be no change to the exterior, merely the hanging of a sign. The plan included a trash enclosure mandated by the state, Korn also said.

“The second floor is residential with a separate dedicated entrance,” he continued, also stating that the building, a former barbershop, is next to a parking lot and a residential building. He also emphasized this was a simple retail plan.

Assistant Planner Francisco Espinoza noted it was located in an approved zone.

“Staff is in receipt of all required submittals. Staff recommends approval,” he said.

“I wish them all the best,” Planning Board Commissioner Steve Lipski said.

“I’m excited for this. Happy to hear all approvals are in place. This is my neighborhood, and I welcome it,” Planning Board Chair Christopher Langston said.

It was approved 4-0(1), with Vice Chair Dr. Orlando Gonzalez abstaining.

The next applicant was for Green Flamingo, which would be located at 447 Central Ave., also in the Heights, and is owned by Michael Fernandes & Brian Philipson. Stephen Joseph, their counsel in the matter, gave some context to their application.

“The applicant was approved by the CCB on August 8th,” he said.

Joseph noted it is an existing retail store that is less than 500 square feet. A basement for storage would be utilized to maximize floor space and the current owners are operating the Jupiter Knights hemp store at the location.

“It is a very small space,” architect Ron Elkins reiterated.

He noted there would be a film on the windows as mandated by the NJCRC, while Elkins described the floor plan and emphasized how secure it would be.

“There would be multiple cameras accessing, viewing this space,” he said.

Elkins further stated that there would be an air filtration system that would be in place to cope with the smell of cannabis.

Joseph said while there are within 200 feet of a school, as a hemp store, their location will be grandfathered in.

“Hemp sales happened as of October 2020 and continue as of today,” he said.

Lipski, also a Heights resident, expressed satisfaction that cannabis entrepreneurs were selecting his neighborhood to open in.

“l love the fact that two proprietors are looking to get off the ground in the area in the Heights. I know the applicant has been operating a hemp retail store without incident and has been exceptionally generous to Pershing Field,” he said, adding that they have also donated to local programs that help children.

Their application was also approved 4-0(1), with Gonzalez again the lone abstention.

HCDO Chair DeGise: Redistricting ‘goes against the progressive values of our...