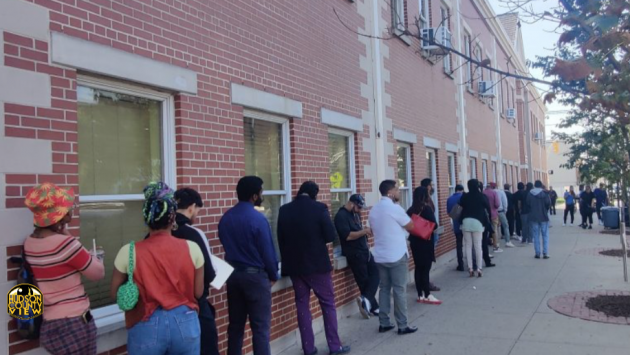 The Jersey City Cannabis Control Board (CCB) has made it very clear that they want the cannabis companies they approve to hire locally. They believe in the State’s mission to help those most harmed by the War on Drugs, which disproportionately targeted minorities.

They won a medical cannabis license last year in the long-awaited resolution of the 2019 medical cannabis request for applications and then received their adult-use cannabis dispensary from the NJ Cannabis Regulatory Commission (NJCRC) in May.

“We’re coming to Jersey City and hoping to offer all Jersey City residents a new position at our dispensary. We hope to open by December. If not, soon after that,” Handy added.

They were hiring budtenders for between $15 and $20 per hour, while a general manager could make anywhere between $70,000 and $120,000 a year. The other companies were hiring people within a similar salary range.

Applicants were told to bring resumes and some filled out applications while there. Overall, about 400 were registered for the career fair, a city official said.

Additionally, Garden State Greenz co-owner Frank Robertson explained they had been approved by the CCB, along with planning board approval and state approval for their conditional license.

Garden State Greenz co-owner Brian Markey said he was unsure when they would open, noting their would be limited supply in the adult-use cannabis market in the short term.

“There’s no product at all, which means if we open soon we would have to buy the product from the same people that the ATCs are buying their product from which would be a conflict of interest,” Markey said.

“Even if they get to a point when whee they would open, it’s still going to be who’s going to get what from who.”

Nevertheless, they hope to open by March 2023, though were also realistic in saying it’s still up in the air.

“It’s still up in the air,” Markey added.

“We’re here to get a base of people we want to hire. We’re pushing for Q-1,” David Moore said about opening in the first quarter of 2023.

They council approved their license via resolution, but are still waiting on their conditional license from the NJCRC for a micro-license.

“We’re at 391 Central Ave. We’re currently running a smoke shop there. It’s across from the post office and parking authority,” he added.

He is waiting for his state license to determine when they will open, as well as how they will acquire products as well.

“I’m hearing that they’re not too much ahead of us,” Jefferson said about the licensed cannabis cultivation companies.

He noted federal cannabis legalization would make it easier to operate a business, also mentioning that President Joe Biden (D) announced the beginning process to change the legal status of cannabis last week.

Jefferson praised the progress made in cannabis under Mayor Steve Fulop’s leadership, compared to other municipalities that banned dispensaries.

Furthermore, Brendon Robinson of the Minority Cannabis Academy (MCA) was also tabling at the cannabis career fair with his partner, Stanley Okoro.

He explained they have been training people to work at licensed cannabis companies, especially in dispensary budtender and plant growing jobs. They have been working with the dispensaries to place people as well.

They recently graduated their first cohort, or class, of 25 and are already looking to recruit their second cohort.