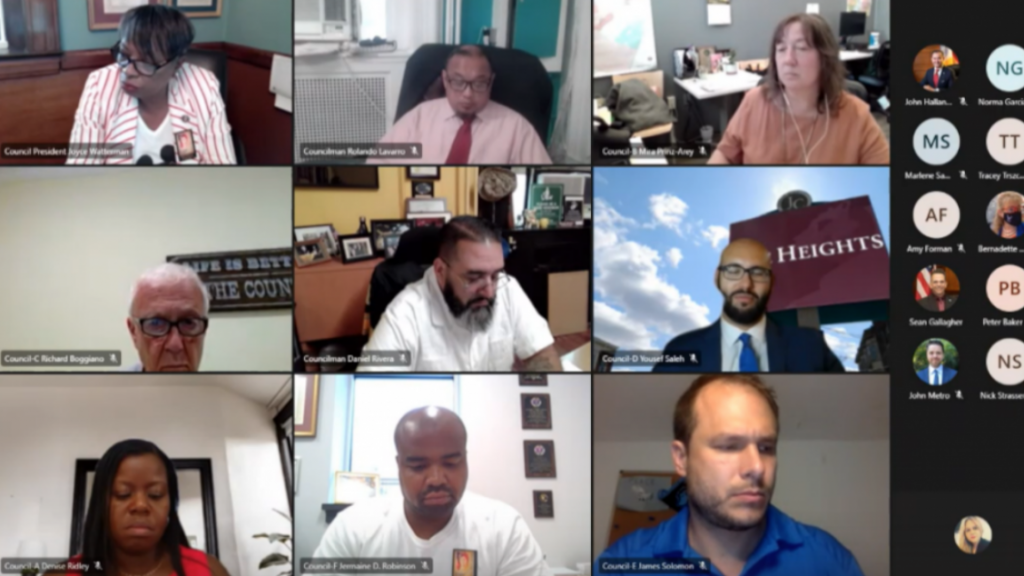 Jersey City’s cannabis ordinance allows all six types of license classes to be established in the city, as the council discussed during their caucus on Monday.

First Assistant Corporation Counsel Nick Strasser explained that Councilman-at-Large Rolando Lavarro’s floor amendments mentioned at Monday’s caucus reduce the fees for micro licenses by half, as well as cutting the fees for all classes of licenses to lower the barrier to enter into the market.

Lavarro commended Strasser’s work on his amendments, reiterating the signage requirements that state their is no smoking in public or dispensaries. His amendments were passed unanimously (9-0) by the council.

“There’s a whole lot of information attached to this ordinance. Is it possible for the city to sponsor a virtual seminar to educate people and the public on this?,” Morris Canal Development Corporation (CDC) President and at-large council candidate June Jones asked.

Council President Joyce Waterman said she was willing to hold more community meetings, though noted this vote would need to take place tonight since New Jersey municipalities only have until August 21st to make their own individual marijuana provisions.

Several speakers expressed their satisfaction on the local legislation the council came up with, which will also split marijuana tax funds between the board of education and social equity causes.

“I do want to commend Jersey City for being a leader and actually providing a very thorough ordinance,” Minorities for Medical Marijuana (M4M) General Counsel Jessica Gonzalez, a Jersey City native, said.

She commended them for not capping licenses and imposing low application fees that make it easier to enter into the industry.

“Access to capital is the highest barrier to entry for applications,” Gonzalez said, noting it usually costs at least between $150,000 and $250,000 to apply for a cannabis license.

“Annual fees are perfectly reasonable,” she said but argued they should lower the fees imposed on dispensaries and lounges, which were left higher than the other license classes.

Since there is no formal definition of social equity, Gonzalez sought to push a separate ordinance defining the term.

“As a business operator, there’s not much else you can make money on when you have that cost on top of it,” she said.

“I do feel as though the consumption lounge fees should be even less than $12,500. I do know that there were a lot of people that were uh impacted by the unequal application of the cannabis laws over the last few decades,” Ward D Councilman Yousef Saleh said.

“I think that even with $12,500, that may be a number that’s still hard to reach for folks trying to basically rebuild their lives after being unjustly imprisoned for cannabis-related offenses. We as a council should work on social equity and social justice ordinance as Jessica Gonzalez did say.”

Additionally, Ward E Councilman James Solomon thanked the activists for fighting for the ordinance before it was passed.

“This is a long process. I know we’re speeding and moving it along so we can get this done before the deadline,” added Ward F Councilman Jermaine Robinson said.

Lavarro added that he was open to the lowering of the cannabis lounge fees before the measure passed 9-0.

The resolution calling on the MUA to repeal their “water tax,” their waste disposal fee implemented this year, and refund homeowners who overpaid after it’s implementation caused a great deal of controversy.

The measure was sponsored by Solomon and Lavarro, as they said they would at a press conference last week.

Teresa Cupo, the owners of Tessie’s Soap Box in the Heights, called the fee burdensome for business owners like herself and city residents, noting that people weren’t prepared for it.

“This is a backroom deal that I’m sure would have never seen the light of day [with a public hearing] … It needs to be rectified,” resident Kristen Zadroga Hart said, arguing that wealthy developers won’t have to pay their fair share.

“The council didn’t make this calculation into this tax. A lot of us on the council are homeowners. A lot of the charges you got we got,” explained Ward A Councilwoman Denise Ridley.

“There’s a lot of miscalculation and a lot of things that weren’t taken into consideration like estimated bills and leaks,” Ward B Councilwoman Mira Prinz-Arey said before voting in favor of the resolution.

Saleh also weighed in before casting his vote.

“All the conversations that day didn’t include a clause within the contract that would allow the MUA to take it over and administer this solid waste fee,” Saleh said about the meeting last year when the contract was approved.

He noted that Regional Industries got the contract because they were the only company that responded to the bid for applications.

“If there was any other bid, we would have taken that,” he added.

Solomon reiterated resolution is non-binding, but said it will still send a clear message to the MUA.

“We as a council never got to vote on this. It was tucked away in the middle of a resolution, and there was no conversation,” he said.

“We just need to start fresh. If we want to look at a user fee on garbage, there’s other cities that do it. Let’s be thoughtful about it.”

HE said Regional Industries is a non-union company that favors large developers over small homeowners and called the water tax regressive.

“This is not the precedent we want to establish of having our services kind of farmed out this way,” he said, continuing to criticize the lack of transparency on the matter.

After the resolution cleared 9-0, Acting Business Admin John Metro reminded everyone that the residents have been advised not to pay this bill and that they are in the process of reimbursing overpayments.