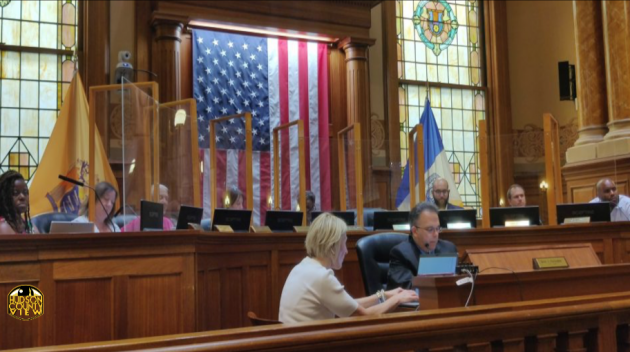 Wojciech Mazur, of the Committee for the Conservation of the Katyn Monument, was severely critical of the Exchange Place Redevelopment Plan, insisting that it would obscure the view of Katyn monument – which has spurned litigation.

“Unfortunately, the most recent plans have not been discussed with us. I can only describe this as a step back. We have always advocated for visibility of the monument.”

He was the first of several who criticized the design for a great deal of shrubbery and a tall-backed bench that would block the base of the Katyn memorial.

Krystyna Piorkowska said groups had sent officials a series of letters asking them not to approve the Exchange Place Alliance SID budget, reiterating that the new Exchange Plan design with shrubbery and a tall-backed bench would block the base of the memorial.

“People will be able to look at Manhattan and approach from Montgomery Street and see the monument as it was planned. Don’t mess the Katyn memorial,” Piorkowska said.

Others echoed a similar sentiment during the public portion.

“Please do not mask the Katyn memorial. The proposed new construction at the base of the Katyn memorial… will hide the public base from view,” John Czop of the Washington, DC-based Polish American Congress group said.

“Please do not perpetuate the second cover-up. The first cover-up was perpetrated by Stalin. Masking the Katyn memorial will in effect mask this crime without punishment yet, and it’s not very unfair.”

Jeanne Daly, one of the plaintiffs in the aforementioned lawsuit, said there is another case contending that the alliance can’t put shovels in the group without approval from the state Department of Environmental Protection.

“They don’t have DEP approval. This is just the continuation of the behavior of the Exchange Place Alliance. They do not conform to the Open Public Meetings Act. What kind of deal-making is going on here? This is all illegal, all of it.”

“Thank you for your continuing support for moving our budget forward. We’ve come a long, long way in the four years we’ve been established. We do many, many free public events. We as a board and a staff have the utmost respect for the Katyn memorial,” she said.

Despite the angry opposition, she said had they held public meetings and worked with the city to incorporate feedback. Cain also noted that they took out grass to make more space for foot traffic during large events, such as the recent free 4th of July celebration.

Still, those were against the endeavor were not moved.

“Take another look at the issue of the Katyn monument. This is a place where dignitaries of other countries come to pay their respect. Please don’t approve the Exchange Place alliance budget. We cannot remove the monument. Let’s bury it in the ground,” Polish American leader Andrzej Burghardt said.

Samuel Pott, of the Nimbus Arts Center in the Powerhouse Arts District, also came out in support of the SID.

“I have a lot of respect for the sheer breadth of programming,” he said.

Ward D Councilman Yousef Saleh said he would vote in favor of the budget, but contingencies needs to be put in place for the foreseeable future.

“I agree that area needs to be renovated, but it needs to be in a responsible way. I’m voting aye, but we’re starting a clock for 45 days,” Saleh noted.

“Some of the things that have happened at Exchange Place is incredible. We have to be sensitive to the community. I do want to look into what’s going on with the Board of Directors. I don’t think it would be acceptable for any SID to have members who don’t live in the city. That accusation does trouble me.”

Ward E Councilman James Solomon, who represents the Exchange Place area, also said he would be in support.

“We want to see renovations take place. There are some very reasonable questions. But I think it is important the budget move forward, which is why I’m voting yes,” he stated.

“I believe there is litigation involving the alliance. I can’t really opine on that question without more details. However, it should not hold up the budget,” replied Corporation Counsel Peter Baker said.

Business Administrator John Metro said the budget won’t be adopted until 45 days later, when there is a final vote on the city budget. In the interim period, they will be engaged in an active dialogue with them.

With that, Gilmore voted aye.

“Move away from the statue. Please stop riling up the community. Bring them in on these conversations more. Keep the statue as it is. Please continue the work. I do have additional questions I’ll send through email,” explained Councilwoman-at-Large Amy DeGise said.

The SID budget was ultimately approved 6-0(2), with Council President Joyce Watterman, who sits on the SID board, and Ward C Councilman Rich Boggiano abstaining. Councilman-at-Large Daniel Rivera was absent.

These  will allow their workers to form a labor union without the companies interfering in the process.

Watterman said she wanted the council to know a micro business is not required to sign an LPA.

Laura Moss, of the Hilltop Neighborhood Association, said the MMD dispensary, which would be nearby at 655 Newark Ave., was active in soliciting their support and that the city should support adult-use dispensaries like them.

He likened the highly regulated and licensed dispensary to an organized crime operation that could bring violence and other issues to the neighborhood.

Saleh said he would vote for MMD NJ Inc. along with Blossom Dispensary, saying, “They have my support.”

“I hope that they do a little more community outreach,” he added about WR Wellness.

“The voters of Jersey City overwhelming approved recreational marijuana. We’re going to engage in tax and oversight to make sure these businesses abide by the rules. I think we should have a high standard of scrutiny when we object to an application,” Solomon said before supporting all three resolutions.

Municipal resolutions granted by the city council are the last step of the local licensing process in Jersey City after applicants get through the cannabis control and planning boards.