The Jersey City Council narrowly approved the Exchange Place Alliance Special Improvement District (SID) budget after a great debate where a few council members and residents spoke out against the entity. 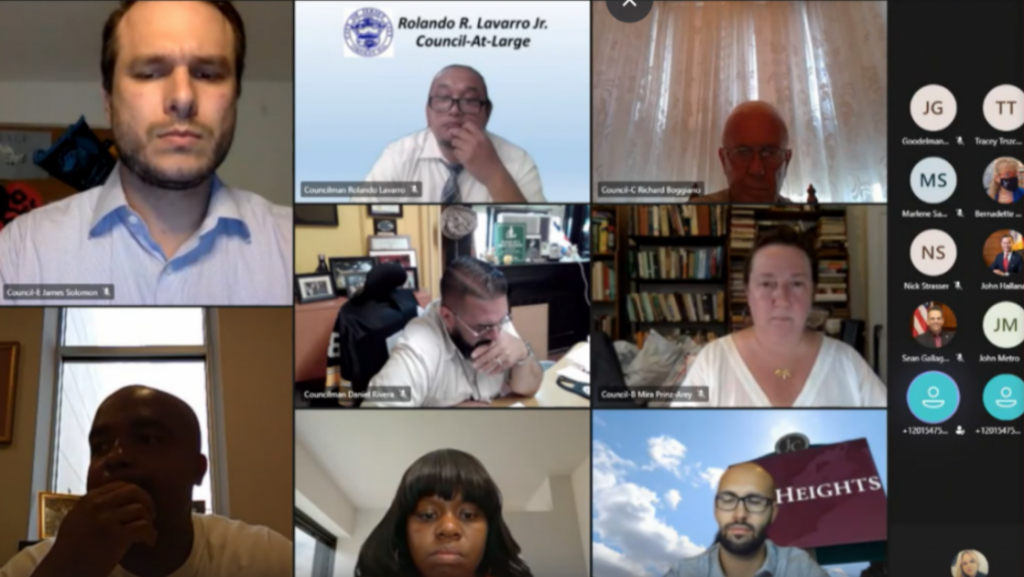 Alice Wozniak, a member of the committee for the Katyn Monument and Historic Objects, spoke in favor of the SID’s budget, while Polish community advocate Krystyna Piorkowska urged the council to oppose the SID’s renovation plan.

She said the SID hadn’t made its just over $9.5 million budget available to the public, which includes considering constructing an access road that would remove 37 percent of the land from public use.

“There simply has been no response. They have simply selected a group of people that does simply not communicate with the Polish community,” Piorkowska asserted.

Jeanne Daly, who has a lawsuit against the Exchange Place Alliance alleging undemocratic practices, such as being escorted out of a meeting by security and Board President Mike DeMarco.

“I’m sure everyone has seen how he ripped the phone out of my hand,” Daly said.

Public records attorney Walter Luers said he was escorted out of one meeting by DeMarco as well.

“There really has not been a good process in my opinion in how they run their meetings,” Luers said.

He also called it a disgrace when the SID unsuccessfully tried to remove the Katyn Memorial in 2018, a move that draw international attention.

Boggiano made a motion to postpone the adoption of the Exchange Place Alliance SID budget until they could look into the matter further.

“The problem is here we haven’t gotten any clarification as to what’s going on at Exchange Place. There’s a lawsuit involved now that we understand, and we just found out that a good part of the park, of that area, is going to be taken up with this road that conveniences the hotel,” Boggiano rationalized, with Ward D Councilman Yousef Saleh seconding his motion.

Upon questioning from Ward A Councilwoman Denise Ridley, Business Administrator John Metro suggested the council could formally request to meet with each Exchange Place member and ask questions.

“They have a line that is for the construction. Do we as a council get to, I guess, tell what they need to do with it? Is that our job?,” added Ward F Councilman Jermaine Robinson.

First Assistant Corporation Counsel Nicholas Strasser said if they approve the SID’s budget, it gives them the blessing to spend the money. However, if the project requires right of way approval for a road, the council would have to approve it.

“My understanding from speaking with them is that they do not have to come back to the city council for any approval on design. They do need to go before the planning board and present it to the planning board,” explained Ward E Councilman James Solomon.

He said he discussed it a month ago with SID Executive Director Elizabeth Cain, who promised an additional public meeting before any projects would move forward.

“Michael Yun and I really fought hard on this issue with the statue. And a lot of the people who were involved with the statue have called and they want to know what’s going on,” Boggiano continued.

“This is our city. It doesn’t belong to certain individuals down at the waterfront there.”

Ridley said she missed the meeting on Monday and would therefore abstain on tabling.

“We’re told that that is a decision of cultural affairs,” she said regarding events held at the waterfront. “So I think it would be good to have everyone in the room because there are a lot of questions on this.”

“I would really like the council president to be here because she is a part of that board. But we usually let the ward councilperson be part of it,” Robinson said, who voted no to table, as did Solomon.

The Downtown councilman said he met with Cain, who showed him the plan that included more green space.

“We need to make sure Jersey City’s communities have access to this. To this public space, to this public asset to the views were all entitled to,” noted Councilman-at-Large Rolando Lavarro.

“None of this was brought up, these specific questions weren’t asked,” Councilman-at-Large Daniel Rivera said regarding Monday’s council caucus.

Boggiano’s motion to table failed 4-3(1), with Boggiano, Saleh, and Lavarro voting no and  Ridley abstaining, with Watterman absent.

When it was time to vote on the SID budget, Boggiano and Saleh said they would hold firm on opposing the measure.

From there, Robinson wanted clarification on if the council had to approve the privatization of public land and Strasser responded that he didn’t think the plans called for that.

“That’s the problem. Nobody knows anything,” Boggiano exclaimed.

“I would definitely vote no if we were voting to give them public land right now,” Robinson said before approving their budget and assessment.

The measure was approved by a vote of 5-3, with Boggiano, Saleh, and Lavarro voting no.

Police: Man arrested in Jersey City for selling $20k worth of...