The Jersey City Council held a special meeting to determine how to spend the funds that come from taxing legal marijuana businesses and appeared to find common ground on an initial 50/50 split between the board of education and the social equity. 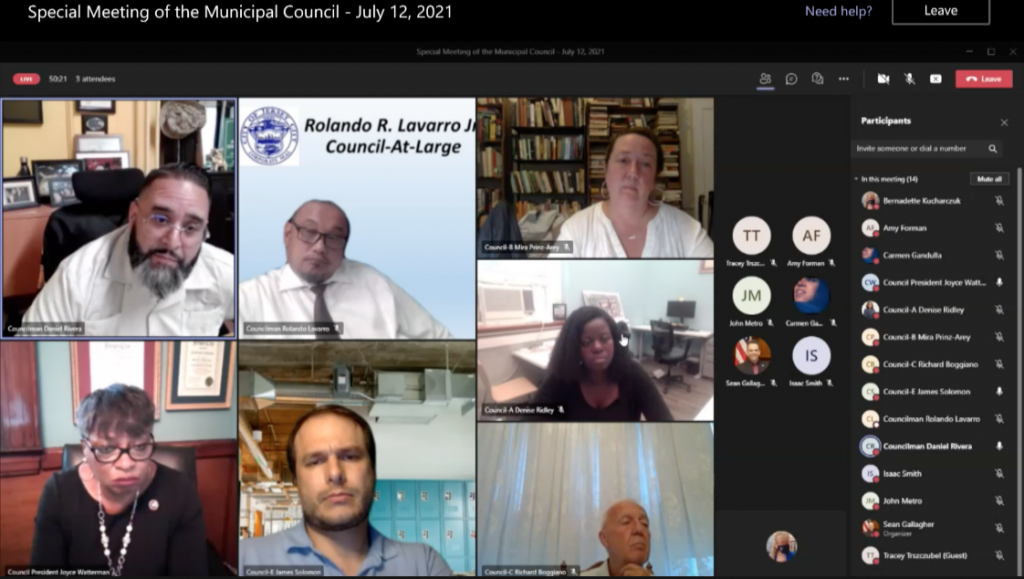 The council did double duty on Monday, discussing the establishment of a Cannabis Control Board in the morning before convening again for a 6 p.m. special meeting to talk about authorizing a transfer and user tax on cannabis sales and transfers.

Ward A Councilwoman Denise Ridley began by saying that the city should “include a social equity component to assist those who have been impacted by marijuana or incarcerated due to marijuana charges.”

She wanted to know how much money would be generated and when it would be available. However, given the unprecedented nature of adult-use cannabis legalization, such figures were not available.

Ridley also noted it was important to know how the public schools will be able to use the money in the classroom, a topic where Ward B Councilwoman Mira Prinz-Arey also weighed in.

“School funding is a long-term equity piece. I know the SDA (School Development Authority) hasn’t been helpful when it comes to our school facilities. So, I think if we are giving a portion of this tax to the schools … that to me has always been really important.”

In addition, she was concerned with helping those who were in jail or had family members in jail.

“Making sure they’re set up for success is paramount to me,”  Prinz-Arey added, noting Oakland, California created an effective social equity program worth reviewing as a model.

She added there should be an oversight committee to track the funds, comparable to the Open Space Trust Fund Committee.

Ward C Councilman Rich Boggiano initially seemed skeptical of the value of cannabis reform, mentioning traffic accidents in Colorado, before coming around and stating that he would support seeing funding go towards the schools.

“I think one we need to put a portion of this money toward the public schools,” Ward E Councilman James Solomon added, reminding his colleagues that they are currently slated to lose $100 million in state funding next year.

“We have to do everything in our ability to address that,” Solomon also said, acknowledging that the marijuana tax alone wouldn’t be enough to make up the difference.

Additionally, Councilman-at-Large Daniel Rivera said he wasn’t sure if this would necessarily be money well spent.

“We don’t have any type of control ya know, over the budget of the school district. My concern is that ya know, us giving them an open door without any accountability is a little concerning,” At Large Councilman Daniel Rivera said.

He also liked the idea of a committee overseeing and controlling the funds.

“There are teachers in our public schools in the Jersey City public school system, and in the summer, they spend thousands and thousands of dollars of their own money to prepare themselves for a September start. The school system doesn’t provide a lot. That concerns me because their budget is pretty big,” Rivera added.

Council President Joyce Watterman chimed in that she favored both a social justice and a school component.

“School should get something. Social justice should receive something, and there should be some type of oversight,” she stated.

“How do we get this done? What percentage do we think should go where? What type of board structure can we do legally?”

Councilman Rolando Lavarro noted initially, the money was supposed to go to the schools, as he and Solomon had proposed in back in October.

He noted it’s difficult to estimate projections and therefore suggested they dedicate the first $2.5 million to the schools before figure out other allocations.

Rivera said that if $2.5 million goes to schools, there’s likely going to be little money for other programs, while Ridley liked the idea of percentages assigned to the funds.

Furthermore, Waterman said the majority of the money should go to social justice.

“If it hadn’t been for the cannabis or marijuana law, a lot of people’s lives would not have been destroyed. You can’t ignore that to me,” Waterman said.

She noted people with criminal records have difficulty finding employment.

Prinz-Arey noted they don’t know how many of the businesses will succeed or fail, making estimations difficult.

“We also want to make sure whatever the percentages are there ultimately going to be effective in the goal,” she said.

Business Administrator John Metro said the funds could be collected as a tax and be distributed, like the Open Space Fund.

Assistant Corporation Counsel Amy Forman indicated the council could accept the ordinance as currently written, where the funds are unallocated as long as the tax itself is imposed so that the manner in which the money is spent could be decided later.

Solomon suggested they should move forward with the tax that will go to a fund overseen by a committee like the Open Space or Arts Trust Funds.

“I’ll just throw out a potential proposal which would be for us to move forward with the tax, say in the tax that our initial allocation would be 50 percent towards education, 50 percent towards social equity – rawly defined, we don’t have to go into specifics – and then to get that on the books before the August 21st deadline and then for us as a council to work on the creation of committees that will kind of determine the distribution of funds.”

His six colleagues all responded that they thought the changes were a good idea and the meeting concluded after just 42 minutes with no other agenda items to discuss.